It’s not often that a pop punk band actually has an affinity for their hometown, but that’s the case for the Chicago trio Four Stars. Originally under the moniker Tougher Than You Thought, the band wanted a new name that would remind them of home, so they looked to their city’s flag, which prominently features four red stars.

Today, the group has released a music video for “Alacrity,” the first single from their upcoming EP Headspace. The emo-tinged track is about coming face-to-face with your problems and overcoming them. Too often we tend to ignore or neglect issues that we know need dealt with and “Alacrity” is a shoutout to those who show a readiness to survive.

“When this song was being written, the news was playing in the background and it was hurricane season at the time,” says guitarist/vocalist Aida Ahmed. “The entire southeast coast of the country was being battered by hurricanes and I thought it would’ve weakened the people, but I was wrong. The people of those communities came together to weather the storms, and rebuild after the destruction. The lyrics were inspired by the champion spirit of those people, that we now try to carry with us in our band.“

Recording their sophomore EP Headspace was a dream come true for the band Four Stars, as they were able to work with Nick Diener of The Swellers. “The Swellers are one of our favorite bands and having Nick’s expertise in the studio truly made an amazing impact on our production,” says Ahmed.

Headapace will be released everywhere on February 29th. Listen to the single “Alacrity” now on Spotify. 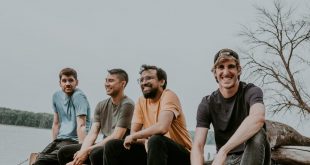