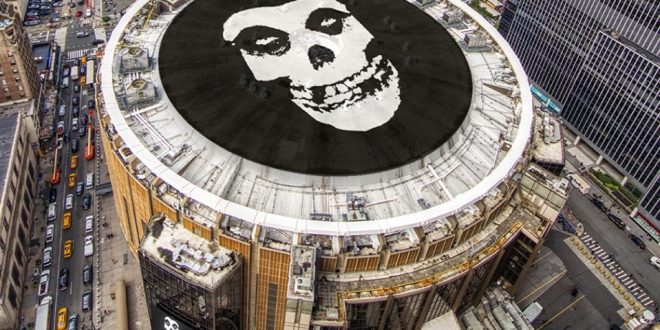 Iconic horror punk band Misfits have announced the location, date, and ticket info for their first New York City show since the original lineup reunion in 2016. On October 19th at Madison Square Garden the Jerry Only, Glenn Danzig, and Doyle Wolfgang von Frankenstein lineup will play their largest headline show ever in NYC. Earlier this week, Live Nation NYC tweeted a picture teasing a New York City date for the band, which was then followed by MSG teasing the show putting Misfits’ logo on their outdoor video boards. Today Misfits officially announced the show with a post on their Facebook page saying:

“DEATH COMES RIPPING AT THE GARDEN when the ORIGINAL MISFITS w/ special guests RANCID & THE DAMNED, return to NYC for their hometown Halloween show—Saturday, October 19th at Madison Square Garden!”

“This day, anything goes… be a part of history, don’t miss it Fiends!”

Tickets for the show go on sale to the general public on Friday, July 19th at 10AM

A presale will be held beginning July 16th at 10AM to buyers who use the code MSG138 at the following LINK.