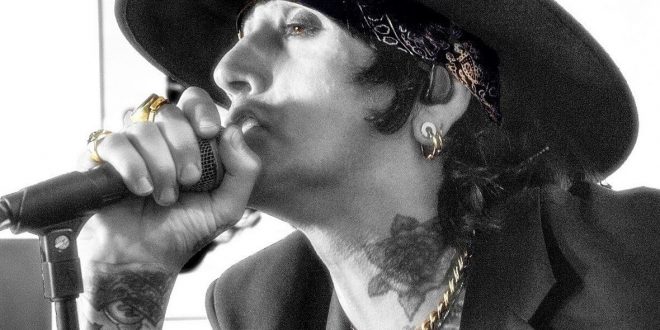 Back in the early-to-mid 2000s, Tony West led the punk-tinged hard rock collective Blacklist Union toward a level of acclaim that burns strong to this day. The San Francisco-based band is presently in quintet form, rounded out by guitarists Em K and Johnny Johnson, bassist Joey Alva, and drummer Anthony Riso. Their most recent album, 2015’s Back to Momo, has often been cited as a definitive career high note. Unfortunately, it would also be the last to feature former band mate and iconic hardcore guitarist Todd Youth, who passed away on October 27th at age 47. In response, the band decided to make the album a free download through their website for the remainder of 2018.

West was open to providing insight on his artistic identity, how Todd’s spirit impacts him, as well as what the band has in store for the future.

Blacklist Union’s chemistry solidified soon after forming in 2004, over a mutual love of heavy music. “We were very influenced by punk, blues, and hard rock,” begins West, noting, “I think a big thing that gives a band its sound is having a distinctive voice.” To help shape his style, West would absorb nuances from bands with charismatic front men, such as The Ramones, Mother Love Bone, and Warrior Soul. In particular, West expanded on what drew him to the showmanship of Warrior Soul’s Kory Clarke, while expressing great appreciation for their early 90s material.

“Kory’s an unsung hero, just like Andrew Wood was. I love his lyrics – they’re punk rock, political, and street. Songs like “The Wasteland” and “Punk and Belligerent” just make you wanna smash stuff (laughs)!” West adds that Blacklist Union were originally poised for a tour with Warrior Soul that failed to materialize, but he hopes for another chance down the line.

By 2006, an influx of cumulative buzz cemented Blacklist Union’s stature with the release of their debut album, After the Mourning. The album was made in tribute to West’s former girlfriend, Bianca Halstead, front woman and bassist of the all-female hard rock quintet Betty Blowtorch, who was killed in a car accident. “People responded to the album the way they did because it comes across as an authentic record,” West remarks, reiterating, “It’s real and it’s from the heart.” The band’s second and third albums, 2008’s Breakin’ Bread with the Devil, and 2012’s ‘Till Death Do Us Part, would especially build that recognition for their stylistic and thematic intensity. West then reflected on how certain word styles worked in conjunction with enhancing a set of themes for these albums.

“From what I write, there’s many different perspectives you can relate with your own experiences, you know what I mean? I love writing lyrics. They’re like riddles. Some can also come out as tongue twisters, and can be easier to sing than to say, so that makes it fun. But every song is its own story, pertaining to my life and what’s around me.” Shortly after, he would put the initial trilogy in summation, saying, “The first three records center around surviving abuse, addiction, and things like my girlfriend, Bianca, or my first wife, Tracie, dying. They’re very dark.”

Conversely, Back to Momo, the band’s fourth release, started the band on a clean slate, which, compared to previous efforts, would totally reshape their thematic outlook. “[We] set out to make something that would bring life back into my creativity – something fun and uplifting – and I think we achieved that,” he says. For him, the passing of Todd has been difficult to stomach to an understandable extent, especially by its happening unexpectedly. Even so, West has nothing but positive things to say about how his longtime friend and collaborator still resonates with him. The two maintained a solid bond for nearly two decades.

“He was one of my closest friends – a real rock n’ roll soldier. He was a living guitar – like a chameleon; he could play anything from Glen Campbell to Glenn Danzig. Not only that, but he was a kindhearted, good soul, a husband, father to three daughters, and was inspiring to so many people.”

“When I was 15,” West continues, “I used to go to the shows of one of the bands he was involved in, Murphy’s Law. Then in 2002, we really got to know each other. There was a lot of humor between us. We’d talk about our triumphs, and we’d even argue a lot, but we’d always remained the best of friends. I’ve dealt with death many times, and I’ve learned that each time, you’re forced to broaden yourself.”

Currently, Blacklist Union is nearing the end of the writing process for their follow-up album, titled Letters from the Psych Ward, which includes three joint contributions between the two musicians. Also included in the album will be a cover of George Harrison’s “My Sweet Lord,” a tribute to Todd, which had long been one of his favorite songs, and is a testament to his shared Hare Krishna beliefs.

I come from a family who is passionate about all things music. I learned to sing at an early age, and by 13, had my very own Fender Strat guitar. I tried my hardest at learning all that I could. Because I was born with cerebral palsy, I had to teach myself an adaptive playing style. I learned to write and record my own music, despite these difficulties. In college, I started making great use of my writing abilities by reviewing music, as well as copy editing. I guess it's best to stick with what you know, while welcoming a fair challenge at the same time.
Previous Live Review + Gallery: Greta Van Fleet at Aragon Ballroom – Chicago, IL. 12/12/18
Next TXTRICA just dropped a very creepy beat