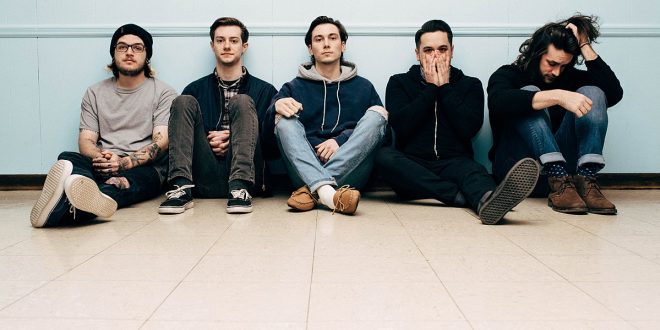 Grayscale, a pop-punk band from Philadelphia, are gearing up to the last ever Warped Tour, as well as promoting their recent music video for “Forever Yours”. As they prepare for their performance at Slam Dunk Festival in Leeds City Centre, we chatted with bassist Nick Ventimiglia about their performance, and what they’re looking forward to about the festival…

You and the band are playing on the RockSound Breakout Stage today – what have you guys been up to beforehand?

Really just prepping, just getting to the UK and getting our minds ready, just making it up to Leeds, so we’ve been excited to get here and start it off.

What do you think of Leeds City Centre?

We literally just pulled up and got here, so haven’t seen the city! We pulled in and checked it out, and it looks beautiful, but we haven’t seen much of it yet.

Your debut album, Adornment, was released April 2017 – how was that for the band?

Have the band got any surprises in store for your performance?

I guess you’ll have to come out and see! Can’t give it away, can’t do it!

Your music video for “Forever Yours” was released back in February – how was that for you?

It was amazing! It was more cinematic than anything. Our good friend, Jordan Mizrahi, we’ve known him for years and years, we went to high school together. He does our merch for us back in the States, he shot and did a great job; the story came out well and people seem to love it. People dig it, it’s a slower one, people have been singing to it so we’re super stoked about it.

Finally, after these 3 days at Slam Dunk Festival, what’s next for the band?

We’re gonna head back to the States, and we leave in 2 weeks for Warped Tour, so that’s a dream as well. So being able to go home, have 2 weeks to breathe, and head back out. We’ll be doing some touring in the fall in the States, and that’s the year so far! Just excited to play the last Warped Tour, and it’s crazy but it’s fun. Been writing a bit for the new record as well.

Adornment is out NOW!