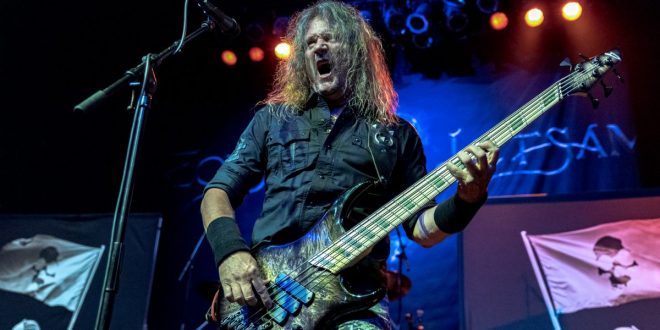 Thursday night the underrated thrash metal veterans Flotsam and Jetsam gave an incredible performance as they heated up the stage for the Swiss metal band Hammerfall at New York City’s Gramercy Theatre. As the band took to the stage opening their set with “The Incantation” from the bands 2016 set titled album “Flotsam and Jetsam“, it was clear to fans right from the start that with over 30 years and 12 studio albums lead frontman Eric “A.K.” Knutson’s vocals have not missed a step. With a short setlist of only 9 songs that mainly consisted of the fan favorites from their first two albums “Doomsday for the Deceiver” and “No Place for Disgrace“. Aside from a technical issue with Michael Gilbert’s guitar mid set, Michael Gilbert and Steve Conley’s guitar chemistry on stage flowed smoothly alongside the standout bass playing of Michael Spencer, the amazing vocals of Eric A.K. Knutson and heavy pounding of newly recruited Ken Mary on drums, Flotsam and Jetsam brought a metal storm for the fans that did not disappoint.

NewYork Based Photographer. Music Enthusiast with a background in Graphic Design. Whether I'm shooting a live event or just out wondering the streets its about capturing the moment.
Previous Interview with Nick Ventimiglia from Grayscale at Slam Dunk 2018
Next GALLERY: HAMMERFALL AT GRAMERCY THEATRE, NEW YORK CITY 5/24/18