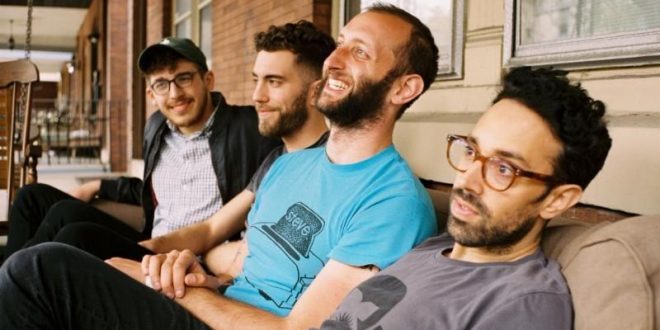 Brooklyn-based post rock band, Good Looking Friends, share the first listen of their upcoming release of their debut album, Settle In, Decay, today on The Alternative. “Decay sounds like its actively avoiding all of the recent emo trends, simply using the idiom’s confessional lyricism and drab moods as a springboard to leap toward other sounds,” says The Alternative, while explaining Good Looking Friends’ “multifaceted, emo-by-way-of-everything-that’s-not-emo sound.”

The LP is out this Friday, April 6th via Old Press Records and the band will play a special release show for fans at Bushwick Public House that night, followed by another Brooklyn show at Muchmore’s on April 20th. They’re also gearing up for their Canadian debut at the Pouzza Festival from May 17-20th.

All Things Go premiered the first video from the album for single, “Front Porch,” saying, “This modern chill-punk single is accompanied by a video that follows the somewhat candid morning of our band in question as they gear up for the fight of their lives – illegal staring contests. The underground bouts take stage with painted faces and looks set to kill while creamy string transitions and seamless drums remind us of this era’s refined tone and expertise behind the wheel.”

Good Looking Friends’ debut LP, Settle In, Decay, explores themes of resistance and memory distortion in a reality of uncertain perception. Rust and water-rot fade like memories of bad tattoos or flash websites. Gutted apartment buildings decay alongside unread books and dirty shoes unworn and forgotten. Stale beer and hangovers cloud mornings. Paunch, rheumatic knuckles, and first gray hairs clog the drain in an apartment that never quite felt like home. The record is part autobiography and part something not quite, drawing from influences ranging from massive cinematic orchestral post rock to jangly, uptempo indie-rock with a distinct nod to the group’s lo-fi roots.

Settle In, Decay was recorded over a 2 week period in August 2017 at Restoration Sound studios by Lorenzo Woolf and Dara Hirsch. It was mixed by Chris Teti (TWIABP) at Silver Bullet Studios and mastered by Dan Coutant at Sun Room Audio. Accompanying the album is a text-based choose-your-own adventure game (goodlookingfriends.us/GLFLP) that allows listeners to customize their track listing and listening experience by interfacing with short vignettes that explore the themes listed above. The record itself is a loose concept album that can be interpreted many ways, playing with the relationship between place and memory, recollection and self deception. Like previous releases, there is a healthy mix of instrumental builds and lyrical intensity that explores those themes (musical and literal) more broadly.