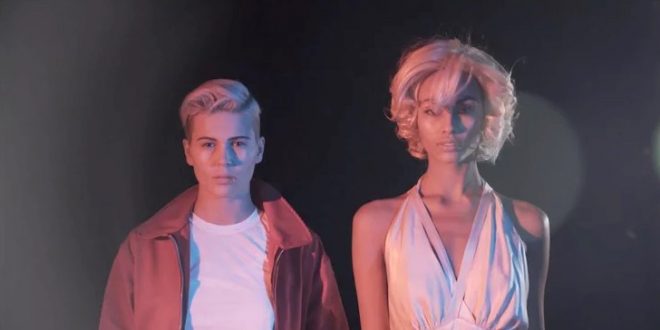 Freedom Fry comments:“This music video is a homage to America and its icons, while representing them in a way that is unrestricted by the rules of the time in which they were created. A woman who feels as though she was born in the wrong era decides to be true to herself and takes the form of her ‘spirit animal,’ James Dean. She sets out on her journey in Hollywood and has a chance encounter with her soulmate. Along the way we’re introduced to a cast of characters that give the spirit of classic America.”

Freedom Fry previously shared their video for “Wild Child,” teasing another track that will appear on their debut album this summer. Following a series of shows at SXSW and a live session with KUTX, the band will bring their kinetic energy to a hometown show in Los Angeles on 4/10 at Moroccan Lounge. Tickets are available for purchase here + stay tuned for additional dates to be announced soon!

Composed of Parisian-born Marie Seyrat and Michigan-born Bruce Driscoll, Freedom Fry has independently amassed over 50 million streams on Spotify and earned numerous #1 appearances on HypeMachine. They recently shared a #girlpower version of Edward Sharpe and the Magnetic Zeros’ “Man On Fire,” which is featured in the new animated film from Intuit, racking up over 20 million views to date.

Freedom Fry’s music, which heavily bleeds the warmth and sunshine of their home state of California, skirts the lines between pop, folk, and alt rock and can be heard in over 50 films, shows, and commercials including Judd Apatow’s Love, Showtime’s Shameless, Grey’s Anatomy, and in high-profile ads for fashion labels such as Lanvin and Madewell. They have performed in Europe and throughout the U.S. with the likes of Stromae, Phantogram, and X Ambassadors.