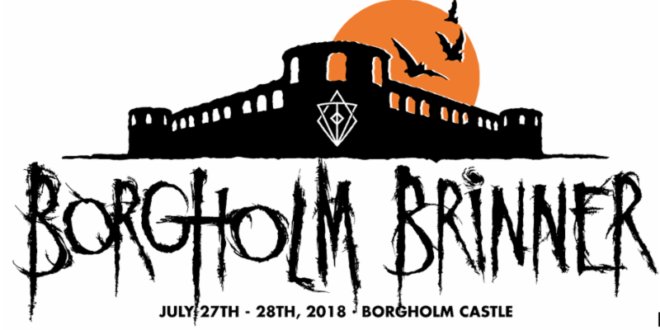 While Gothenburg legends IN FLAMES finish the last shows of their extensive Co-Headline arena tour with FIVE FINGER DEATH PUNCH, they are already keeping fans on their toes for next year. Today, IN FLAMES announces their very own two-day festival called “Borgholm Brinner”, or “Borgholm is Burning”, which will be held at the infamous Borgholm Castle of Eastern Sweden’s island of Öland. On each evening, IN FLAMES will perform an exclusive headline set after a lineup of around 5 bands – soon to be announced. The dates to remember are Friday, July 27 and Saturday, July 28.

“Borgholm Brinner” allows fans to be part of a milestone in the band’s history – an exclusive weekend filled with the best food and drinks (including Anders Fridén and Björn Gelotte’s beer brand, Frequency Beer Works and an exclusive batch of In Flames Gin),fantastic bands and a few more surprises in an intimate setting.

Tickets to this once-in-a-lifetime festival experience go on sale January 29 at 10.00 am CET. Make sure to visit https://www.borgholmbrinner.se and subscribe to the RSVP link to receive all updates immediately.

Singer Anders Fridén states: “I think every band dreams of being able to do this one day – at least for us it’s always been in the back of our minds and right now feels like the best time to do it. Whether or not it’s putting on your own festival, it’s an indescribable feeling to have created a community from your music, and even crazier to have the ability bring that community together in a physical place – playing and enjoying music together, drinking together etc. And in a castle of all places. That’s another thing. It wouldn’t be an IN FLAMES festival if it were just happening on a plot of dirt. It’s got to be special so our fans can have the ultimate experience, so we can pay them back for being so great to us for 20 years with an awesome weekend they’ll never forget. We’ve also hand picked the best bands for everyone to enjoy and although we can’t say who’s playing yet, we can promise there will be no disappointments. ”

IN FLAMES recently released a digital EP »Down, Wicked & No Good« featuring cover versions of DEPECHE MODE’s ‘It’s No Good’, ALICE IN CHAINS’ ‘Down In A Hole’, CHRIS ISAAK’s ‘Wicked Game’, and a live version of NINE INCH NAILS’ ‘Hurt’. Due to high demand from the Jesterheads, the songs will now be released as a 10” mini-LP on March 16th, 2018 and be available in clear, blue-black splatter and light blue. You can now pre-order the vinyl editions here.

Since forming in Gothenburg, Sweden in 1990, IN FLAMES have had seven albums debut in the top ten in Sweden, including two #1 debuts. They have toured the globe countless times, performing alongside some of today’s biggest rock and metal acts, including METALLICA, AVENGED SEVENFOLD, DISTURBED and IRON MAIDEN, and have held several mainstage and headline spots at various music festivals around the world, including Ozzfest, Download Festival, Graspop, Taste of Chaos, Hellfest, Rock Am Ring / Im Park and many more.

Previous Breakthrough Indie Duo The Boxes Catalyzed By Single, “Angels Are Gone”
Next Bands That Made 2017 Such A Success for Rock Music