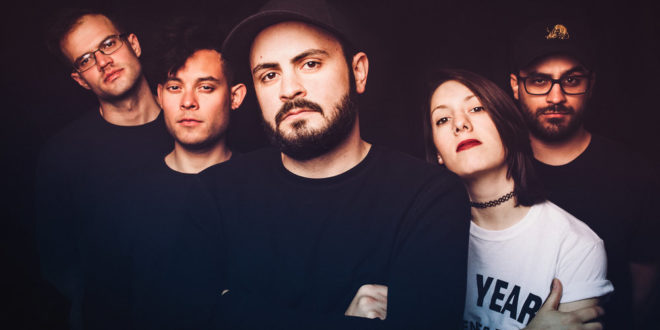 Interview with Chris LoParto and Mike Sanchez of Can’t Swim

Manchester in December is a far cry from the likes of New Jersey, as it’s certainly a lot colder, but the members of Can’t Swim, one of the support bands for CREEPER’s Theatre of Fear tour, still kept in good spirits about it all. We got to chat with Chris and Mike from the band about performing in a church-turned-venue in Bristol, the best dogs they’ve seen on tour, and more importantly, if they can actually swim!

ME: You’re currently on tour with CREEPER on this Theatre of Fear – how has it been?

ME: You released your album, Fail You Again – how was that for you?

C: It’s cool, man. Yeah, we had an EP before that, so it’s cool to have more of a plethora of songs to pick from; we worked real hard on it, we did it all ourselves, and people seemed to be kinda vibing it, so it’s been good. And now we’re already setting up for LP2, always writing, always recording, but it’s been a blast!

ME: What are the main influences to your sound?

C: I think we’re all very different, we all listen to different music, we all grew up playing different kinds of bands, Chez and I used to play in a punk rock band, Danny [guitar] does solo stuff, like acoustic and very soft rock things, Greg [bass] can solo and shred metal guitar.

C: All very different people, so I think it’s quite across the spectrum of different bands, different sounds, and it all kind of blends together, and makes Can’t Swim! I don’t think anything directly – we didn’t set out to be like “Oh, we’re gonna be the next Rush” or anything, but I think we’re still trying to figure it out. We’re a new band, we don’t know what we sound like yet, and every record, hopefully, we’re getting closer and closer to what we should be doing.

C: Sound guys are way nicer here; that’s pretty much the only thing I could say! The kids, they’re the same, think everyone’s out here trying to have a good time. Everyone who works in the music industry seems to be a lot more polite in England than they do in the States! But yeah, we’re actually, figuring it out, we’ve almost played as much in the States as we’ve played England! Ever since we’ve started the band, we’ve been flying over here; it’s like our second home!

ME: You performed in a church-turned-venue in Bristol – what was that like?

C: Yeah, it was cool. You set up so much, and CREEPER has its own backline, so I didn’t really see too many churchy-things. I don’t know if they do any church services there anymore, but it was cool, Bristol was cool; we played a record store down the street, acoustically. We’ve played Bristol 3 or 4 times now, so it’s a really cool city, yeah it was awesome. Kids were going off for CREEPER, so it was badass.

ME: What’s your favourite track from ‘Fail You Again’ that you like performing?

C: Performing, for me, is probably “Stranger”.

C: And we play, pretty much, those songs almost every single night.

ME: In this day and age, social media has become a prominent factor in terms of growing as a band; what would you say are the pros and cons for you in your band?

C: Pros, it’s lovely to tell kids what time we play, so they show up! Cons, I don’t know, I don’t think we’re very eccentric human beings and take a million selfies of ourselves, which I think kids are getting used to. I don’t really see many cons, it’s just what you make of it. I think it’s a benefit to be able to show kids what you’re doing on a larger scale; back in the 80s and 90s, it would be hard to gain a following in a country that you’re not from, but with social media and the Internet, it makes it a lot easier. Yeah, we love it. Definitely don’t shy away from it! Just think it makes it a lot easier, instead of standing outside of the show, pamphleting saying “Hey, we’re playing here in a week!” – just do an Instagram post, and takes the hard work out of it!

ME: We have a few fan questions for you: Emily Holden asks What’s your favourite song from the other bands (Nervus, Microwave, and CREEPER)?

C: I’m not sure what the song is called, by Nervus, ‘cause I’m pretty new to their band, but I think it’s called “Tread Lightly” [sic], they play it second to last, it’s pretty great,. I’m a big fan of “Vomit” by Microwave.

M: I was gonna say that too!

C: They also close with that song, very great song. And then CREEPER, we’ll do “Hiding With The Boys” [sic], I love the bridge in that song, and every night it sounds great.

ME: James Daniel Cooper asks Why do you use 3 guitarists, as it’s unusual for the lineup?

C: It came to terms with, when we recorded our last record, Fail You Again. In the studio, we have a lot of 3 guitar parts. 2 guitar tracks, in the recording process, didn’t really seem to cut it, so there was a third one, and then instead of playing to a backing track, or having the songs sound a little bit different than on the record, we didn’t want to do that to kids, and figured “Why not bring in another guy?”, and Danny, who was the drummer at the time, said he would love to do it, and I was like “Oh, ok, so I guess we got another drummer”, and that’s how Andrea joined the band. Yeah, it’s just to make the album more true to life; I think a lot of bands now do multiple guitar tracks in the studio, and we wanted to kind of portray that live, so we had another guy! 3 guitars!

ME: Jemima Smith asks What’s it like having a female drummer in a music scene dominated by male drummers?

C: I can’t really speak too much on [Andrea’s] behalf, because I am a male, but she seems just as eager and into the same things we wanna do with our band. I’ve known Andrea since I was in high school; she lives on the block that we practice on, she’s a hometown friend. We didn’t look at her like that, we just wanted someone to play drums, Andrea hit us up, or I hit her up, and she seemed very eager to join the band, and we never really looked back/ But on her behalf, I think it’s awesome; you know, that maybe some girl drummer thinks it’s male dominated, which I think it’s so silly to me because there’s been some amazing female musicians throughout the years, so I don’t think women should hold themselves back. She hits harder than anyone I know playing the drums, but yeah it’s great! If kids can be inspired by her, someone back there, I think that’s awesome. It’s definitely something we want to be a part of – I think guys and girls should be treated equally when playing instruments. We all got 10 fingers! We’re all the same out there.

ME: James Taylor asks How did you decide on the album covers, and who are the people on them?

C: It’s the same person, it’s an ex-girlfriend of mine who a lot of the lyrical content is about. We chose it because it was the first thing we did, with the tape over her mouth – it was a relationship of mine that catered to a lot of the songs, and when it came time for an idea to Fail You Again, I just thought of a cool theme to see this woman growing up, and how her relationship changed, and how she changed, but yeah, it’s the same person, the one on the white and the one on the green [cover] is the same girl. Just kind of thought of it, the label liked it, and went with it!

C: Actually, there was one just upstairs, Gilbert the dog – I think it’s one of the guys in Nervus’. It’s like a pug, he was pretty sweet. It’s funny, we actually talked about this; a lot of people that put bands up are the same type of people that have dogs, so we meet dogs all the time. But I’m gonna say Gilbert the dog, the best one of this tour for sure!

ME: George Bowman and Michael Boyle ask Can you actually swim?

ME: Finally, after this tour, what are your plans for the future?

C: January-February might be spent recording and pre-production, and writing songs, March we have a full US tour, it’s not announced yet, later in the year we’ll be back in England, and then who knows? Touring, and putting out records for the next 5 years until I fall over is pretty much our plan!

Can’t Swim’s album, Fail You Again is OUT NOW!