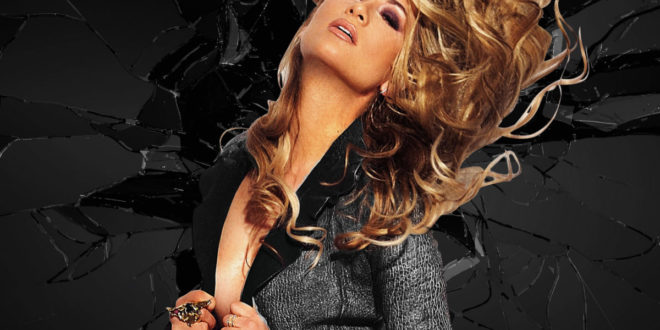 International pop-artist Darja is a multilingual singer-songwriter hailing from Riga, Lavtia. Experience from Germany’s Popstars and ITV’s Pop Idol has helped shape her career and a drive within that shows no sign of backing down. Though performing shows and festivals in the NYC area, Darja hopes to broaden her horizon in an upbeat notion while standing strong. She recently released her single “Rise Up” via Your EDM and is already making waves. Darja opened up about her fight for her music career, her inspirations, and the upcoming holidays.

You’re latest single “Rise Up” is doing so well. It’s filled with such strength and encouragement. What’s the inspiration behind the song?
The inspiration behind the song is basically my whole life story. I was born in Latvia and grew up in Germany. It’s a very symbolic song for me and my family, who kind of uprooted themselves from Latvia to start from scratch in Germany. My mom was cleaning houses, even though she has a college education. My dad was a security guard, even though he was a journalist. “Rise Up” was inspired by achieving it all – against all odds. Starting fresh, starting new. For me, personally, I was so close to becoming a pop star in Germany. I was sitting in the board rooms about the sign the big deal, and it last-minute didn’t work out… I was very young and naive about the industry. At the time I was very disappointed how everything turned out, and I was like, “I’ll never sing again!” So, I decided to go to college in England. Slowly and steadily after a few years of stepping away from music. I ended up working in finance, and after two years of finance, I had an epiphany. I was like, “Okay, I’m not doing what I’m supposed to do.” I packed up my bags and went to study acting at The American Academy of Dramatic Arts. I moved to New York. Once I went to acting school, it brought me right back to music. It was an amazing transformation. The way I experienced coming to music was from a deep, authentic, and grounded place. A realistic place, no illusions… “Rise Up” was born from that. I’m going to leave my baggage behind and stop listening to my insecurities. Stop self-sabotaging myself. It’s time to do it again. I want this song to be for everybody who is going through internal turmoil, internal insecurities and self sabotage, even though deep down they know what they’re supposed to be doing.

Since you took a break from music, do you think that kind of helps you stay more focused and your eye on the prize now than it did back then?
Absolutely. Back then, I almost took it for granted. Now, every single thing I achieve, I know I achieved it on my own motivation and inspiration. Everything – even this interview, I’m so grateful for it. Every step of the way counts. I’m much more present in the whole process. It makes me feel much more empowered.

You have a very upbeat sound. Do you plan to stay in that EDM realm or at least in pop music?
I’m definitely much influenced by pop. The next song I’m going to be releasing is called “Darkest Blue,” and it’s actually a ballad. I would say it sounds like a haunting indie-pop. Ever since I started this journey, I’ve been growing as a person and artist. “Darkest Blue” is something my fans will hear that’s… different. Very much me.

Do you primarily write your own songs?
Yes. “Rise Up” was a collaboration with a team called The Practice Worldwide. They’re located out of Manhattan. The whole theme and most of the lyrics are mine, but I very much believe in collaborating with people. There is a certain beauty with creating something of your own, but I feel like the best work happens in team work.

Absolutely. Especially for ideas that you never would have even thought of or little hints here and there.
Yeah, the process is so much fun!

When was the first time you knew you wanted to be a musician? Who are your influences?
At the age of 4, I started to train as a rhythmic gymnast. It’s not the most popular sport in The United States, but back where I’m from it’s an Olympic sport! (laughs) Let’s put that out there! It’s basically like sports gymnastics but with ribbons, balls, and different elements you have to throw in the air and catch them… From the age of 4, I was performing and dancing to the most beautiful music, from classical to modern. I grew up surrounded by music. Overtime I started singing along to music. First you have to find a love for it yourself. My parents were amazing. They heard some sort of talent and thought vocal lessons would be great. I started vocal lessons at the age of 12. From there, it was a very natural progression to create music. It was within me to create it. That’s when I realized performing and being on stage is what I was love to do. After a couple of deviations, I have finally arrived! (laughs)

What was your first album you ever purchased?
By the way, I was inspired by Mariah Carey. When “Without You” song came out, (sings a snippet) that inspired me so much. The first album I purchased, oh my gosh, it was a boy band! I think it was Backstreet Boys or Boyz II Men.

With the holidays coming up, what are some family traditions that you do every year?
The tree goes up, there’s no doubt. I love decorating my Christmas tree. My theme at the moment is gold and white. I love the smell. My family gets together every year for New Year as a celebration. Usually my family comes over, we have a big dinner. In our tradition where I’m from, we exchange gifts on New Year. The night of New Year is when everyone opens presents.

Hey, that’s a great way to start a New Year! What are some goals you hope to achieve in the New Year?
Some goals I hope to achieve…. there’s a lot. First, I will be releasing “Darkest Blue” and the music video for it. I would love to have a BPM Breaker on Sirius XM. It’s one of my heart goals; I really hope it happens. I’m definitely going to release a new EP. I’m on a roll right now. I want to create and produce music on a steady basis. The goal is always find amazing teams to work together.

Great. You kind of answered my last question. I was going to ask: what can we expect? So definitely new music?
Yes. More amazing collaborations, more visual art. It’s so important to me that my music videos are visual art… Everything that I create has to be real, authentic, and visually stunning. That’s the goal.

Thank you so much for taking the time out of your day to talk to us. Can’t wait to hear the new music. Happy holidays!
Thank you to you too!