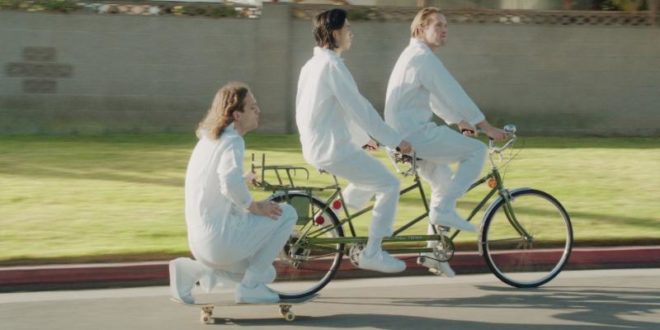 West Coast rock trio Sir Sly release their lively video for their second single “&Run” off their sophomore release Don’t You Worry, Honey out now on Interscope Records – PRESS HEREto watch. The new video, which premiered on Earmilk, builds on the fearless and authentic approach the band took in creating their latest album, and wasco-directed by the band’s vocalist Landon Jacobs along with Kevin Clark.

“We wanted to write and center this music video around the concept of a fantastical day in the life of 3 bandmates,” Sir Sly said in a statement to Earmilk, “complete with choreographed movements, kitschy transportation methods, airline gear debacles, matching pajamas & outfits.”

The band will launch their first 2018 tour in Orange County, a place the band once called home, on January 11th in Santa Ana, California. They’ll support K. Flay on her headline dates throughout January before wrapping up in Nashville on early February (full listing below). Tickets are available and can be purchased – PRESS HERE.

“&Run” joins the band’s already impressive catalog of singles, which have already collectively gathered nearly 40 million streams on Spotify. The track recently hit #1 on the SIRIUS Alt 8 – and is pushing up climbing the alt radio chart now. The first single from Don’t You Worry, Honey, “High,” has accumulated around 13 million streams and hit #3 on the Alt Radio chart, #2 on SiriusXM’s Alt18 and remained on their charts for a massive 19 weeks. They previously hit #3 on the Alt18 with “You Haunt Me.” Their debut single “Gold” hit #27 on the Billboard Alt. Songs chart and #45 on the Rock Airplay Chart.