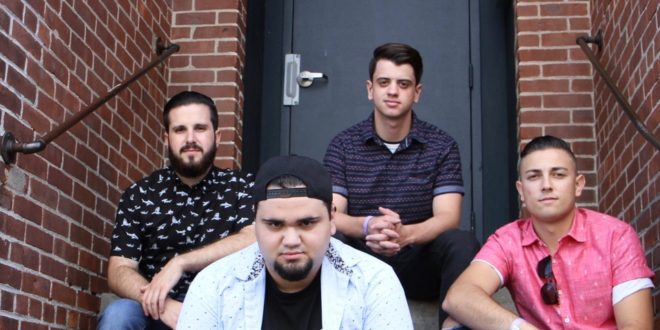 Many are familiar with the story of a band signing to a big deal and then having everything changed about them, but the Massachusetts pop-punk quartet Ten Cents Short take the concept to the next level in the cheeky new music video for their single “Higher Powers”. The band narrowly makes it out the song’s intro before they are stopped and some “changes” are made, which only get increasingly more aggressive as the tale unfolds.

“‘Higher Powers’ is a song about working hard and putting your all into something, meanwhile someone else gets all the glory,” says vocalist/bassist Aaron Couto. “The moral of the song is to always stand for what you believe in and don’t let anyone be your puppet master.“

The video for “Higher Powers” was directed by Dan Fried at Just fly Casual and is off the band’s upcoming sophomore EP Major Steps, Minor Setbacks that will be released on May 26th. The record was co-written, engineered, mixed, and mastered by Chris Piquette at No Boundaries Studios, with the exception of the single “Beggars” that was co-written and produced by Four Year Strong‘s Alan Day. Pre-orders are available now on the band’s website.

CD RELEASE SHOW:
Saturday May 27th – @ The Met in Pawtucket, RI
RSVP to the event here.

Ten Cents Short was founded in Somerset, MA in February of 2014. The band released their debut EP All I Ever Wanted in May of 2015 followed by a single in December of that year. Ten Cents Short currently has plans for a Sophomore EP to be released spring 2017. With new music and a growing fan base, Ten Cents Short has their eyes fixed on a journey of fans, friends, and success in the music industry. Positive attitudes continue to drive the band to fulfill their dreams and provide their fans with high energy music and inspiring personalities.