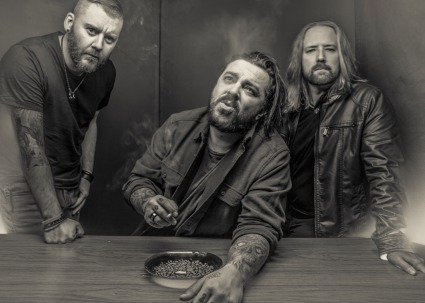 One of South Africa’s best rock bands is back and better than ever. Seether is on a roll right now releasing their new studio album Poison the Parish. Seether consists of Shaun Morgan (vocals/guitar), Dale Stewart (bass/vocals) and John Humphrey (drums). This is the seventh studio album from Seether, who originally started up as band in 1999. This marks the first release on Shaun Morgan’s new record label Canine Riot Records. Poison the Parish is a real treat for die hard Seether fans as it will take them back to the roots, exploring what the band was all about. This record has no influence from any record company, no predefined agenda. It’s core is made up of 100% of Seether’s own blood, sweat and tears.

The album was recorded at Blackbird Studio in Nashville, Tennessee and is the band’s first record produced by Shaun Morgan. This record is jam packed with 15 tracks. Definitely the band’s heaviest record to date, it will not leave fans disappointed.

Poison the Parish has an amazing selection of tracks. How about the one that kicks off the record? It’s called Stoke The Fire. Boy, you better hold onto the arms of your chair for this one. You’ll find yourself head banging to this song without even willingly knowing it. Seether hasn’t had this sound since Disclaimer II. The raw energy is ballistic and can’t even be put into words.

This is one of those albums you’ll buy and play it over and over again. Throughout the entire CD, I did not find a single track that I didn’t enjoy. I’ve been playing it endlessly and I’m happy to say the long wait is over. Poison the Parish puts Seether back into the spotlight. Tour dates are out there, covering a majority of the United States. The boys in Seether have announced the fifth annual Rise Above Fest which takes place in Bangor, Maine. The Rise Above Fest is the largest suicide awareness event in the world and will be held on July 22nd and July 23rd.

For more information on Seether:

Resident Music and Photography addict from Northern, New Jersey.. USA. Got into both music and photography at a young age.. it's been history since!
@billtnj
Previous Ten Cents Short Release Music Video for “Higher Powers”
Next Gallery: Lacuna Coil at Majestic Music Club in Bratislava, Slovakia 8/5/2017