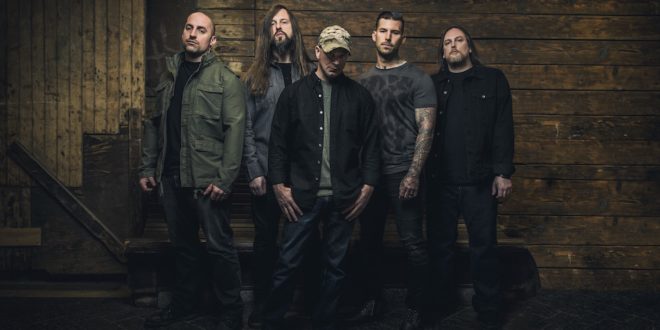 For 15 years, Massachusetts-based quintet All That Remains have made their mark and become a juggernaut in the hard rock music scene. Fronted by self-confessed contrarian Phil Labonte, the band has experimented with a range of styles including pop, rock and caustic metalcore with just one objective – to create great songs that come straight from the heart.

As All That Remains prepare for the release of their eighth studio album, Madness, due out April 28th – which was produced by Grammy award winning Howard Benson (Halestorm, Papa Roach, Chris Cornell) – fans can be assured that’s exactly what they’ll be getting. The band gave a small sampling of the record with the help of Sirius XM’s Octane, premiering two hard-hitting but very diverse tracks – a melodic, lyrically inquisitive track entitled “Madness”that showcases the range of Labonte’s vocal ability, and a dark, brutal selection called “Safe House,” full of guttural screams, aggressive instrumentation, and pit-ready breakdowns. Today, All That Remains have released lyric videos for each song. Loudwire is currently hosting a compelling visual for “Madness” that speaks to Labonte’s military background and offers facts about veteran’s homelessness, PTSD, mental health issues, drug use, and more (watch HERE). Bloody Disgusting has the more  “lighthearted” of the two with a pseudo-slasher film themed treatment, for“Safe House,” which fits as the song was inspired by the Dexter TV series (watch HERE).

“Our goal has always been to write songs that we like,” Labonte says. “All That Remains has seen a lot of criticism about the songs that we’ve written and what people think we’re supposed to do. We started as a very underground death metal kind of band, we’ve since moved away from that and have never apologized for it. The music we’ve written has been reflective of that and I think the lyrics, the ideas, have always been reflective of that as well.”