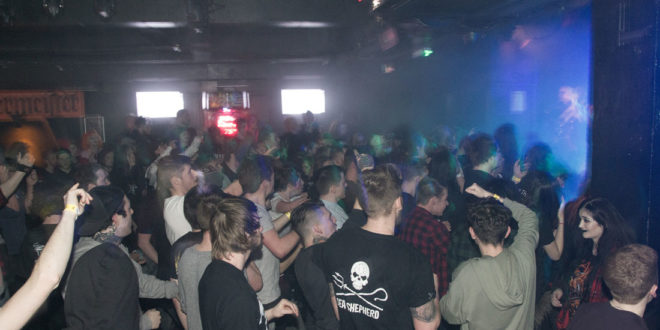 An incredibly heavy, sweaty mosh pit filled show would be the best way to describe Chelsea Grin tonight. After speaking to lead singer Alex, before the show he did say to is we could expect things to hey a little crazy and crazy they were.

Kicking things off were Make Them Suffer would brought the party. Incorporating a cheeky little bit of dark piano into their heavy music just switched things up from your usual heavy show. Some of the music had a really great sounds and just put you easily into the mood for a heavy off the chain show. Clearly there were a few dedicated fans in the audience going 10x harder than the rest of the crowd. Screaming every single word and even at this point. The show was starting to get sweaty. Voice of female keyboardist Heather was an incredible input into the mix and of course you couldn’t get through that set with a cheeky little bit of in time clapping. Overall I genuinely thing Make Them Suffer are and extremely well put together band.

Betraying The Martyrs brought that beautiful Scottish here we fuckin’ go chant along with their intro that made me feel like I was right in the middle of TV show Stranger Things. This bands music was just incredible and they hit that perfect balance of clean/scream vocals. Instrumentally the band were nothing but sound. Their backing music was deep, dark and hit you in the very pit of your stomach. Lead singer Aaron is for sure an entertainer. He just matched the crowds level of energy and vigour, not once letting them slow down – “Nobody sleeping, everybody wide awake.” Having just realised their new album The Resilient the band made it clear that music is was matters. Everything about the new songs just screamed incredible. During the set there were some strong words from the band regarding the world current situation on immigrants and all the shit that’s been happening in the world and Aaron just reminded everyone to love one another, that were are all surrounded by many different nationalities and races and no matter what the situation we should accept and love that fact. The best way to sum up their performance in one phrase is just. Sheer fucking insanity.

A pounding intro you could literally feel in the soles of your feet was all Chelsea Grin needed to let you know they were here and meant business. Long hair, covered in black was the general attire of the crowd and it was just sea of people totally loosing their minds to Chelsea Grin‘s heavy and insane sounds. It was almost as if the first two bands were easing us in for the sheer madness. Alex wasn’t lying when he told us things were going to get crazy, pits began to open, hair was whipped and the dramatic music rang through your whole body. I have absolutely no problem in saying Chelsea Grin are phenomenal at crowd pleasing. There wasn’t a single time people’s feet touched the ground. Watching Glasgow’s infamous ‘Pit Troll’ get himself in the crowd was when you know things started to get serious. Through the whole set I couldn’t stop feeling that rumble in my chest from the heavy bass line. I feel like I really should throw out a mention to Victor, the bad ass keyboard player. I watched him total slay that keyboard and the vocals. Much the same as Betraying The Martyrs, that extra voice just resonated so so well throughout the set. For someone who’s not at heavy shows very often this was one I am glad I didn’t miss.

Chelsea Grin have just released a deluxe edition of their album Self Inflicted which you should definitely check out here!

19 Years old from Glasgow Scotland, currently studying Radio at City of Glasgow College in conjunction with my own Youtube Channel!
@johnhughxs
Previous Interview: Alex Koehler of Chelsea Grin, Glasgow, 08.02.17
Next Gallery: Make Them Suffer at The Cathouse in Glasgow, 08.02.17