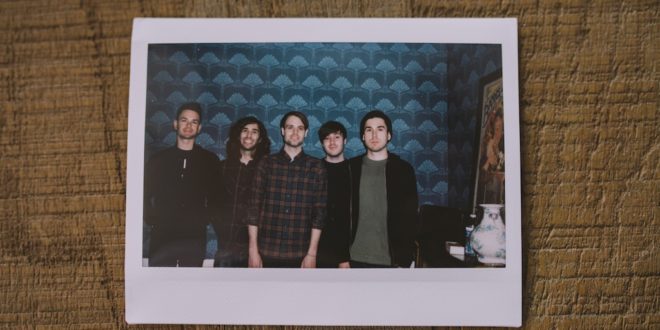 Ahead of their December UK headline dates, and to celebrate these and Halloween, REAL FRIENDS have released new video for the single “Mess”, a song taken from the band’s recent, new album The Home Inside My Head (released on May 27th through Fearless Records).

The video is a brilliant mix of imagery and homage to Donnie Darko, Freaks and Geeks and a typical US evening during Halloween.

Bassist Kyle Fasel explains; “We are stoked to show everyone our music video for ‘Mess’. The coolest part was having our fans involved in the filming of the video. We had about one hundred extras in the video over the course of two days. All of those extras were our fans. If I was in one of my favourite bands’ music videos I would be super stoked. So it’s awesome to make our fans feel that.”

Front man Dan Lambton as well: “We had wanted to work with Kyle Thrash for a very long time. We met him a few years ago while we were out with Modern Baseball and saw him grow as a director through all of their music videos along with Neck Deep and State Champs among many others. Kyle brought a new vision to our whole perspective on videography. We never had extras, an intricate set, or as detailed of a story line before. We had a lot of kids from the Philly area come out and give their time to be in the video and it was awesome getting to connect to fans in a different light. I’m also very glad I didn’t fall off the bike while we were shooting.”

The band have had a busy tour season since the release of their album, which has included dates in the UK and the Slam Dunk Festival this May, followed by a main stage slot on the Vans Warped Tour 2016 (where both MTV and Buzzfeed noted REAL FRIENDS as an artist to watch on the tour this summer), and currently a US co-headline tour with The Wonder Years.

Alex Julia, is a NJ based singer-songwriter, having just released her debut Alt Rock EP …