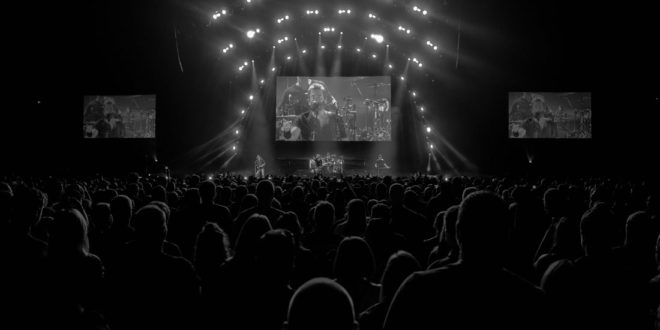 The lights blacked out in the huge 13,000 capacity venue. An intro voice boomed out: “In the history of rock ‘n’ roll if you ask them what they love most, their answer would be the beat.”

Monster Truck bounded on stage dawning Braehead Clan ice hockey jerseys – Glasgow’s local team. This band are exactly what you would expect of support at a Nickelback show. Long hair, fancy guitar and a heavy beat. Also what I felt was an incredible warm up choice for the main event. They even had Ryan Peake join them on stage as a little teaser for Nickelback. The band had such a mixed genre vibe about them, the went from rock with a little bit of country thrown in to a Blues number dedicated to Nickelback and their crew for taking them on this tour. The played their new song and the sheer amount of energy and excitement the band put into the whole set was amazing. They knew how to work a crowd and I must give a very special mention to the guitarist, Jeremy Widerman, who loved showing off his insane and incredible skills. The band made every second count on the stage because the whole set nobody once felt like they wanted it to be over.

But that however, didn’t stop everyone feeling the buzz and energy for Nickelback. A stadium of 13,000 waited patiently. Lights going off in a flash and the huge screen behind them flashing with images of war, terror and conformity. A perfect time to launch into “Edge of a Revolution” and I can say, for a band who have been around as along as they have, they all looked absolutely incredible, excited and very happy to be on that stage. The arena was absolutely packed to it’s hilt with fans young and old, it was an amazing generational mixture. Although I can imagine a lot of parents covering their ears before the start of song number two when singer Chad Kroeger, tells the crowd as he switches to his sparkly guitar – “this is a phrase not a lot if bands can get away with… You look so much cuter with something in your mouth.” To which the band burst into action again for “Something In Your Mouth” and let’s just say it didn’t matter what age any of the crowd were, they still had an incredible amount of fun as the whole venue was bouncing. An evening with Nickelback wouldn’t be complete without a lot of drinking and we we’re assure by the band that there would be.

From the loud excitement of the first three, things were slowed down and I can honestly say I felt so much emotion during the next bout of songs, all of them evoking so much emotion. Far Away had the crowds lights up in the air and honestly the band didn’t even need to sing along because the crowd was that loud. It was absolutely beautiful and I must admit that I she’d a tear listening to “Photograph”, bringing back old memories and the bands old photos reeling on the screen behind them from fun times and old tour memories. As the the song faded out a full moon appeared on the backdrop accompanies by beautiful yet eerie music as Ryan Peake‘s keyboard was set up for “Lullaby”. Again, Glasgow got all the lights in the air and the atmosphere was just incredible but quickly not to dwell on the sad angsty songs too much there was A LOT more alcohol brought on stage by ‘sassy’ Bradley who lined up Jäger bombs along the drum riser in the typical American style red party cups.

Things started to hot up again during ‘Figure You Out’ where Chad and Ryan, were just so beautifully and perfectly in sync. This was the first taste we got of Ryan’s solo vocals when Chad threw the mic across the stage for him to catch and lets just say I was very pleased with his incredible tone of voice during his verse (those who know the song will understand) and it didn’t stop there. Playing the soundtrack to Spider-Man ‘Hero’ and Ryan took the second verse and the crowd went absolutely wild for them and it was not wonder. One thing I have to mention is one of my favourite quotes from the evening was Chad speaking about getting in trouble “Whenever I’m in trouble, I just retreat into the corner…and find alcohol immediately.” And it bought the crowd into hilarity.

Something I love that bands do is when they bring fans on stage for a number and when Nickelback were about to preform their hit song “Rockstar” they brought up two fans. Young Jack, who was more than happy to milk the crowd and live the rockstar life style, down playing the crowd like he was the main man. Accompanying Jack on Stage was Jo, who had been to a total of 55 Nickelback shows. She knew every word and every action to Rockstar and she was just absolutely amazing, you could tell just how grateful the band were for her.

It would not be a Glasgow show without the infamous “HERE WE FUCKIN’ GO” chant and the band loved it even saying “I don’t know who the Einstein was that invented that was but I like it!” and “See if that was two people in an elevator it would mean nothing but thousands of people at a rock concert, that shit gets you amped up” which is great because it only ever happens here in Glasgow! However, one thing you never do in Glasgow is bring up football politics…but this was Nickelback show! Chad told the crowd how Ryan was in a Glasgow pub the evening before which also happened to be the evening after one of the city’s biggest rivalry football matches – Glasgow Celtic vs Glasgow Rangers. Ryan didn’t want to mention the songs they were singing in the pub so they quickly moved on. Chad continued to talk to the crowd and said how crazy it is that you can’t walk into pubs wearing football colours, jokingly saying “You come in here wearing that shirt, see those twelve guys over there? Yeah, they’re gonna kick the fuck out you!” it was hilarious and something that everyone could relate to because weather you support those teams or not, you know the story.

After the normal “we are gonna go off stage now, you’ll chant and we will come play more songs” they came back on and needless I say I was not prepared for the lyrics of “Everlong” by the Foo Fighters to come out Chads lips. I think because everyone in that arena had such an incredible taste in music, it got the whole arena jumping once again, everyone knowing the iconic words. But I can assure you it was NOTHING compare to the final song of the night. “Burn It To The Ground”. The crowd went absolutely crazy, you could almost say they nearly burnt the venue to the ground with the sheer mass of people jumping up and down, just loving and embracing the music. I know Nickelback are a band commonly hated on but after tonight I cannot understand a reason why because it was absolutely insane! Everyone left the Glasgow venue with a smile on their face and ready for more partying!