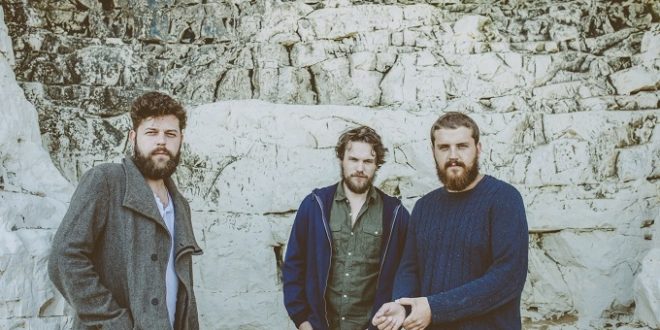 Acclaimed U.K. band Bear’s Den debuts the official music video for their track “Dew On The Vine.” The video was directed by Louis Bhose and features the band and crew in a Fight Club-inspired ping-pong tournament. Additionally, U.K. comedian Tom Gray—host of BBC TV series The Ladventures and YouTube aficionado—guest stars as the “Prince of Balls” in the video.

The song appears on their new album, Red Earth & Pouring Rain, which debuted top 10 in the U.K. and continues to receive critical acclaim from The Wall Street Journal as well as Clash who says, “A mature, creative second album…this London-based band have carefully crafted a second album which showcases a euphoric step forward and poignant growth in their musicality…Davie’s attention to detail paired with his ability to make you feel involved in these heart-wrenching situations is second to none.”

Most recently, the band made their U.S. network television debut on “CBS This Morning: Saturday,” with performances of “Red Earth & Pouring Rain,” “Dew On The Vine” and “Emeralds.”

Red Earth & Pouring Rain was recorded at Rockfield Studios in Wales with the band’s longtime producer Ian Grimble. Following the amicable departure of guitarist Joey Haynes, Bear’s Den now comprises a six-piece touring unit built around a nucleus of singer-songwriter Andrew Davie and multi-instrumentalist Kev Jones, assisted by touring musicians Jools Owen (brass/drums) and Marcus Hamblett (synths). “Being on the road so much pushes friendships to the limit, and really affects your relationships outside of it. You get extreme highs and lows,” reflects Davie.

The London-based band played music in various incarnations before officially forming in 2012. They developed a cult following in their short existence as a result of their writing, harmonies, D.I.Y. approach with custom hand-stamped CDs and extensive touring. It was only after finding their identity on the road, which was documented in the film Austin to Boston, that the band focused their attention on studio recordings. Their 2014 debut LP Islands was released to widespread international critical acclaim. They received a 2015 Ivor Novello Award nomination, the U.K.’s most prestigious songwriting accolade, alongside notable acts Ben Howard and Hozier.

Previous LAYNE Announced As Support For Fall K.Flay ‘Crush Me’ Tour
Next W*ores. Debut Music Video for “I See You Are Also Wearing A Black T-Shirt”