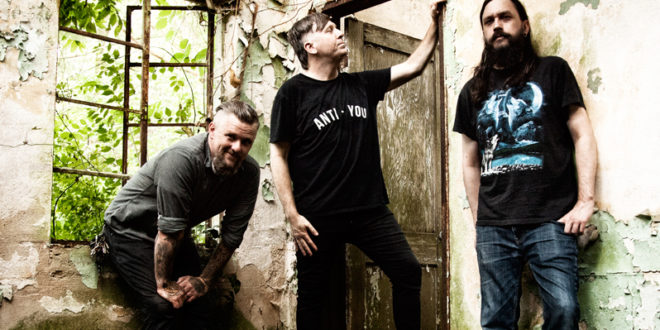 W*ores. Debut Music Video for “I See You Are Also Wearing A Black T-Shirt”

Atlanta natives WHORES. have debuted a new music video for their track “I See You Are Also Wearing a Black T-Shirt,” today exclusively via CLRVYNT.COM. Directed by Whitey McConnaughy (RED FANG, IRON REAGAN), this is the first time the band has done a music video. “Mastodon let us use their space to film, and Whitey is pretty much the coolest dude ever,” says frontman and guitarist Christian Lembach. “so it was just a matter of us doing what we do best: sweat and scream in a basement.”

Whores. has released three singles to date off their new LP, all can be found on major streaming services and below. Those tracks are available for streaming and as an iTunes Instant Gratification download, meaning that fans who preorder the record will receive the songs instantly.

WHORES. will release GOLD. on October 28th, 2016 via Entertainment One (eOne), the first for their new label home. GOLD. will be available overseas via SPV.  The debut LP was recorded at Parhelion Studios with producer Ryan Boesch (Helmet, Fu Manchu, Melvins) The band is also revealing the artwork for GOLD. done by Patrick Copeland.

GOLD. is the follow up to the highly buzzed about EP Clean (2013), which was widely cheered by critics. Also recorded by Boesch, the record sold out within a month, prompting the band to quickly release a second pressing.Clean is now on its fourth pressing.

The band will join TORCHE in supporting RED FANG later this fall. Dates will kick off on November 18th at Slim’s in San Francisco, spanning coast to coast before wrapping up at the Wonder Ballroom in Portland on December 17th.“Red Fang and Torche are both huge inspirations, and we’re flattered to be a part of this amazing tour,”says Lembach. “Imminent tacos to follow.”