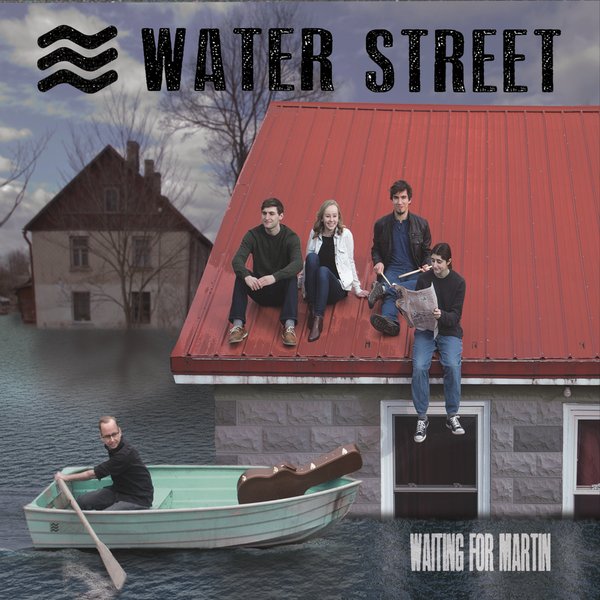 New Jersey’s latest exponent to the music world, a five piece Americana outfit named Water Street, certainly touches on much more than the standard folk, country, and blues turns. There’s more than a sampling of rock and roll’s rambunctious spirit romping through some of the album’s earliest cuts and, even on the later nominally more sedate numbers, something of that raucous energy infiltrates even the lowest-fi surroundings. The ten songs on Waiting for Martin feature two vocalists trading off primary singing chores while supporting the other singer when the spotlight isn’t focused on them, but the album has remarkable unity thanks to the fact that these two vocalists are working in sympathy with each other from the first song to the last. The lyrical material is written to a high standard as well that befits the nuance and tastefulness of the material.

They revisit a durable cliché of blues music with the album’s first song. “Better Off Alone” has a slightly dark comic edge, as the title implies, but the highly entertaining yet deceptively simple arrangement coupled with Dave Paulson’s highly engaged vocal redeem any familiarity here and sends Waiting for Martin off to a fantastic start. “Tidal Wave” never tumbles over into boneheaded rock histrionics, but it does pack enough punch and velocity to make anyone sit up and notice. Claire McNulty’s paint-stripping power will curl your hair as well, but it isn’t entirely without soul or technique. Her dramatic and impassioned reading helps the song come vividly alive. “These Eyes” shares some similarities, superficially, with the album’s opener, but Water Street has pulled back some on the reins and breaks up the song’s potential groove with jerky, disjointed movement.

“Outer Space” signals a shift of sorts on the album. The second half of Waiting for Martin allows the band a chance to show off their affability even more than before with a variety of songs powered by acoustic textures and taken at a shuffle pace. There’s a fair amount of underplayed humor laced through this song, but Paulson and McNulty’s vocals never compete and, instead, sing as one voice from the outset. The fun continues with the next song “Something Anything”. This is largely McNulty’s song, particularly with the inclusion of her marvelously careening piano playing, and it continues the album’s gradual move towards a brighter outlook than heard on the first half. The album’s centerpiece track “Maybe” runs a hair over five minutes in length and gives Water Street the stage they need to unveil a wide-screen, deeply felt ballad with all the songwriting trademarks that have set this collection apart thus far. “Colors” concludes Waiting for Martin at the same mid-tempo pace marking much of the album’s second half and the ultimately hopeful tenor it strikes makes for a very satisfying ending. This is Americana music for our modern world, still full of the same depth and soul heard on classic recordings, but much more resonate with our modern lives and challenges. It is presented exceptionally well and the production highlights the talents of everyone involved.