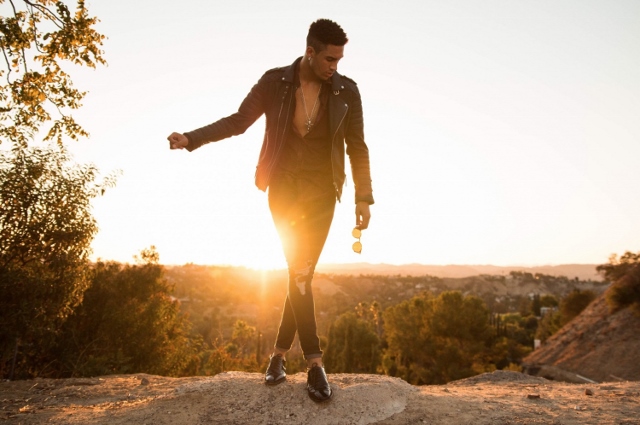 Jaxon Howden is a New Zealand-born, Texas-raised singer-songwriter and producer currently based in Los Angeles. He has released numerous singles within a two-year span, “4 My” proving most popular. While his material normally panders to hip hop and R&B crowds, he frequently adds guitar into the mix. The guitar takes an active presence over rhythms normally bolstered by big bass, which I can appreciate. Listening further, I wanted to see how the guitar aesthetic would transition into newer material.

Case in point, Jaxon’s debut EP, Wildwest, succeeds in showcasing a predominant rock foundation. Its live instrumentation offsets his R&B singing style, although these elements work together well. The opening “High Noon” contains a boldly developed buildup of increasingly layered guitars. Once the drums enter the chorus, their organic presence matches the warmth of the chords. I also appreciated how the autotune gives his voice a chorusing effect, rather than sounding overly robotic. With each progression, Jaxon dwells on the inspiration gleaned from his past relationship. Even though this note is bittersweet, it signifies a willingness to let go and begin anew—to California. Accordingly, “Smith & Wesson” dictates a newfound sense of maturity; moreover, it is a step into wider—nonetheless painfully real—territory. Children are stripped of freedom, streets walked cautiously, and police exercise paranoia over protection. Amidst societal conflict, Jaxon keeps his humility intact, choosing to move forward rather than put up a fight. The song’s instrumentation, by contrast, consists of a pleasant and straightforward two-chord jam. I felt the solo was a nice addition as it focused on phrasing and the intent of the melodies, rather than sheer virtuosity. The title track conveys a starkly somber tone, fueled by an intense longing to return to familiarity. It is the first of the heavier tracks, containing alternative riffs that expand upon the initial progression. This particular buildup is similar to that of the first song, although the payoff is slightly better executed. By the latter chorus, Jaxon unleashes the raucous, carefree context of the song title, comprising a foreground of overdriven guitars and somewhat distant cheers.

The second half of the EP is characterized by a period of momentary high, strain, and ultimate revitalization. Starting with the upbeat and beguiling “Red Velvet,” Jaxon finds himself infatuated by another love interest. The riffs expound his positivity; they are simple, hook-laden and persistent, like a heart itching to feel whole again. On the song’s solo, I can get a sense of his spontaneous excitement and peaking euphoria. Its harmonized lead feels more pronounced on one side, though the flow stays consistent when fully considered. “Hennesy (ft. DYSN),” the penultimate track, accordingly sees Jaxon’s outlook drop from a plateau. He is numbed upon the realization of having a mere summer fling, rather than a lasting connection. At the chorus, the collaborative effort feels much appreciated. Jaxon initializes a thought with a somewhat retro metal tone, while DYSN completes it in a familiar R&B manner. In a way, this exchange plays like a conversation between friends—where one states what’s on his mind, the other demonstrates his understanding by reminding him of his inner strength. On the final track, “Black Gold,” Jaxon is reassured of his worth. He sets a ground of personal space, testing the other’s willingness to be with him, regardless of physical and emotional distance. From a thematic sense, this song puts the entire EP in summation. Its thick guitar drive rings throughout the song, and feels especially practical in conveying a restored confidence.

Overall, the Wildwest EP is where Jaxon solidifies his reputation as musician and producer. Its newly showcased alt rock leanings not only emanate great skill, but balance and authority. Jaxon’s telling of his Californian journey is down to earth by all accounts, and it is sure to provide an indelible footnote to fondly acknowledge in his career.

I come from a family who is passionate about all things music. I learned to sing at an early age, and by 13, had my very own Fender Strat guitar. I tried my hardest at learning all that I could. Because I was born with cerebral palsy, I had to teach myself an adaptive playing style. I learned to write and record my own music, despite these difficulties. In college, I started making great use of my writing abilities by reviewing music, as well as copy editing. I guess it's best to stick with what you know, while welcoming a fair challenge at the same time.
Previous Water Street – Waiting for Martin
Next Downie drops hot new single

A brooding, chest-beating rhythm. The crunch of the guitars, moderate and melodic. Lyrical statements that …