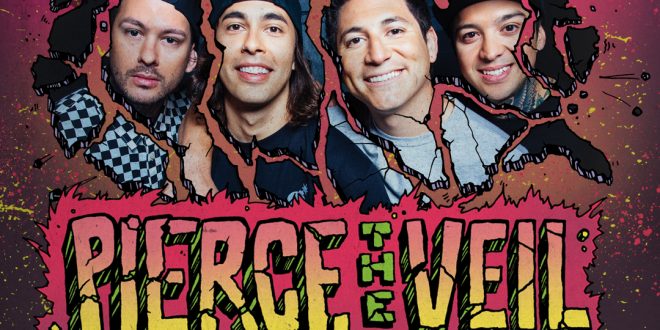 Armed with Misadventures, the band’s long-awaited and critically-acclaimed new album that debuted at #4 on the Billboard chart, “Circles,” their hot new single now Top 40 at alternative, a 2016 MTV Fandom Award nomination for “Bandom of the Year,” and the just-completed, sold-out U.S. “Misadventures Tour,” rockers Pierce The Veil announce “The Made to Destroy Tour,” a seven-week North American trek that kicks off on September 3.

Presented by Journeys, “The Made to Destroy Tour” will launch in San Francisco and take the band coast-to-coast wrapping up in Los Angeles on October 16.  Neck Deep and I Prevail will provide support on all dates.  Pre-sale/VIP packages are available for purchase now; the public on-sale begins this Friday, July 22 at 10AM local time.  Check out the band’s tour trailer here and then log on to  piercetheveiltix.comfor all details.

While Pierce The Veil performed the entire Misadventures album start to finish on their just-completed tour,  their set for “The Made to Destroy Tour” will be comprised of songs from the band’s entire four-album catalogue, including some from Misadventures.  PTV fans know that the band isn’t one that just gets up on the stage and plays; while specifics are still evolving, concert-goes can expect lots of cool production elements throughout the evening that will make for a memorable show.

Confirmed dates for Pierce The Veil’s “Made To Destroy” North American tour are as follows:
pierce the veil Tour Dates