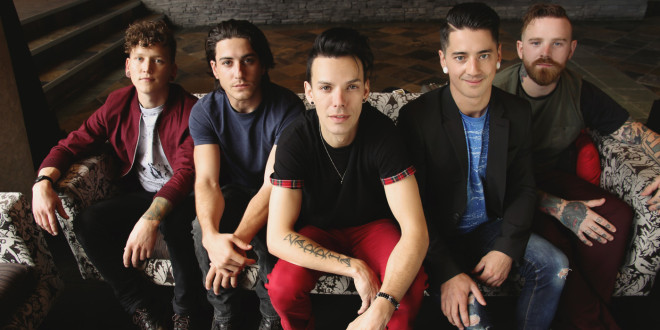 THE NEW ELECTRIC’s Latest Single Will Turn You “INSIDE OUT”

“It’s difficult to describe our own music,” says Kyle McKearney, lead vocalist of Alberta, Canada’s latest alt-pop/rock exports THE NEW ELECTRIC. “What I’ve taken from others is that it’s hooky, pop, alt, with a Euro influx and a retro quality,” he laughs. One quick spin of their latest single “INSIDE OUT” whose video was premiered last week on Canadian TV network MuchMusic, and those adjectives quickly fall into place.  It’s hooky, pop, alt with indeed a Euro influx and a bit retro… and it’s massive.

With a hugely epic and soaring chorus that begs to be heard in a stadium, “Inside Out” is a love song written on a much smaller scale. “I wrote the bones of ‘Inside Out’ while prepping for my wedding,” McKearney explains. “I was to be married in a week and couldn’t stop this song from happening. The chorus lyrics actually became my vows to my lovely wife Sarah.” Its accompanying video projects the earnest lyrics through short vignettes of people struggling to be with their loved ones as well as the loss without them, and opens up with a slate that reads “Fight for equality and love. No Matter how different your stories are. Everyone deserves to love and be loved,” a sentiment that rings close to McKearney and band. “I will always fight for equality in this world, it is when we are at our best selves, when we see each other as equal,” he explains of the universal theme. “I believe that we are making huge progress in this area. I can see a big difference even from when I was a kid –  the internet is bringing awareness, Woman’s rights, Gay rights, racial tensions. Suppressing humans is not right. We are all equal and free at the core.”

Recording the tracks in Los Angeles in the summer of 2014, The New Electric got together with world-renowned producer Brian Howes (Simple Plan, Boys Like Girls, Hedley) to work on new music which spawned these two singles. “Brian is a wonderful soul, so full of life and music,” McKearney says. “He gave us guidance, direction and pulled out our strengths and created a sound we love. It’s been a pleasure and a joy working with him and we basically created everything with Brian from the ground up.”

The New Electric’s previous hit single “Life’s What You Make It,” which was Canadian entertainment network Corus Radio’s “Next Big Thing” and Bell Media’s “Future Star,” launched the band into the media spotlight, garnering chart action on Canadian radio with the single reaching #18 on Hot AC, #26 on CHR (Top 40) and #21 on Main AC. “We approached our music strategy simply by aligning ourselves with people who vibrate on the same frequency,” he continues. “We followed our collective gut and focused on the music and our intention for the music. Our intention is to spread love, joy and fun, so we had to seek out like-minds.” With that song opening the doors, “Inside Out” is bound to push them wide open.

With the two singles reacting quite organically in their native Canada, The New Electric has their sights set on the U.S. and growing naturally there. “We’re working on spreading our music and message as far as the fates will allow,” he explains. “We have an EP to release yet and are prepping up for festival season! We love our fans and appreciate every chance we have to connect with them.”

The New Electric is Kyle McKearney (lead vocals), Shade ‘Indy’ McKearney (bass, vocals), Chris Doi (guitar, keys, vocals), James Janetty (keys, vocals), and Adam Casey (drums, vocals). “Inside Out” and “Life’s What You Make It” are both available via iTunes, Spotify and other online retailers.