How much Russian rock bands do you know? I know only few of them. It makes the next band, Lunar Woods, more interesting and exotic. Alternative Rock band from Izhevsk released new single that week, called ‘The Story’.

Lunar Woods is rather young band, founded couple of years ago. Guys didn’t record full-length album yet, but already released few EPs that you can check on their official website or Soundcloud accounts. Band’s style is rather hard to describe with one word, it sounds like mix of Deftones, Alice in Chains and maybe Tool or Perfect Circle. At the same time Lunar Woods has more ‘European’ than ‘American’ sound with accents on music atmosphere than catchy rhythms and melodies.

‘The Story’ is the first single from upcoming full-length album. Middle-tempo groovy anthem about freedom and life changes. According to the band, “This is a song about the way, the way of life. Sometimes a person is held by their past, and can’t breath free because of it. They can’t move on and can’t change something in their life, because all of their life revolves around that past.

But sometimes they can find a power to break those chains and to move on. They take a step in their new life and feel so free. They are excited but anxious. Full of emotions of his new life after a long period of slavery to self-past-problems. It’s all about freedom.”

I suppose anyone had something like that in their life. When you drop some weight from your soul and start to move on breathing with full lungs.

The song has catchy chorus with intensive guitar features (that sound like big bees!), long atmosphere bridge and deep lyrics with untypical singer.

Stephen Vicino is the founder of MusicExistence.com. He created this site to give talented musicians a voice and a way to be discovered.
@@svicino
Previous Gallery: ATLAS GENIUS at SHAKY KNEES in Atlanta, GA 5/15/2016
Next THE NEW ELECTRIC’s Latest Single Will Turn You “INSIDE OUT” 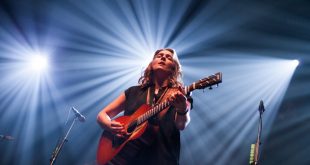