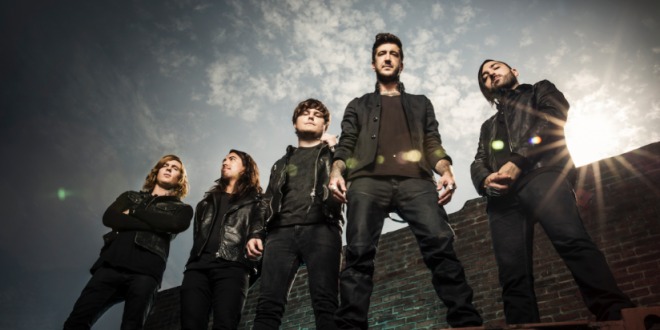 OF MICE & MEN have announced that Hellions will support them on their two small shows in London and Kingston, around their second stage headline slot at Slam Dunk Festival. Austin Carlile personally reached out to the band after he saw them online and the rest is history – Sydney based Hellions have previously spent most of summer on tour around Europe and they have a new album in the works, set to drop soon on UNFD.

Tickets are on sale now

Previously, OF MICE & MEN announced LIVE AT BRIXTON (Rise Records) double-disc set which is available from May 27th. Fans can get the live audio for “The Depths” as an instant download by clicking HERE to pre-order this special CD/DVD live package on iTunes. “The Depths” originally appeared on the band’s 2012 deluxe reissue of The Flood.

The Brixton concert was Of Mice & Men’s largest headline show to date – a blistering set in support of their RESTORING FORCE: FULL CIRCLE reissue, which has sold just south of a quarter-million copies in the U.S. alone.

LIVE AT BRIXTON follows the release of “The Full Circle Story,” the stunning 5-part documentary series currently streaming on the band’s website(OM&M are launching a new site today at 12 noon pacific). Viewable to those who sign up for OF MICE & MEN’s new fan club, The Ampersand, “The Full Circle Story” was shot over the course of the past few years, following the band as they traveled around the world performing sold-out shows for an international fanbase whose members number in the millions. Along the way, the quintet (vocalist Austin Carlile, guitarist Alan Ashby, drummer Valentino Arteaga, vocalist/bassist Aaron Pauley and guitarist Phil Manansala) released Restoring Force, which hit No. 4 on the Billboard Top 200 Album Chart and No. 1 on both the Billboard Top Independent and Top Rock Albums Charts, shared stages with artists such as Metallica, Linkin Park and Queens of the Stone Age, blanketed rock radio airwaves, garnered critical acclaim and amassed over 20 million YouTube views and close to 5 million social media followers on the strength of a visceral sound and live show.