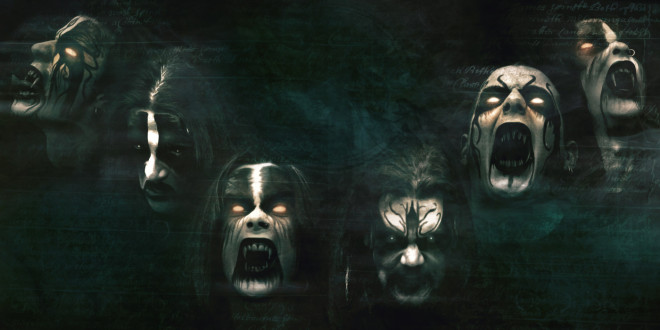 A piece of Black Metal history has been lying dormant for over two decades, deep in the shadowy abyss of dust-ridden, musty vaults. The authors of this forbidden rite decided the world was not quite ready for its offering in 1995, and thus locked it away from the light. But the years passed, and gradually it’s power grew too strong. Freed from its vault by genre-defining creators CRADLE OF FILTH and the recently resurrected extreme music label CACOPHONOUS, the two have joined forces to finally unshackle the unreleased sophomore album DUSK AND HER EMBRACE… THE ORIGINAL SIN as a CD and digital album on 8th July. A vinyl LP version will be available later this year.

“The wait is over. The original ‘Dusk and Her Embrace’ is dragged kicking and screaming into the world, and people can finally hear for themselves what a true masterpiece it is”
– Neil Harding, Cacophonous Label Head

CRADLE OF FILTH signed to Cacophonous in 1994, releasing their debut album THE PRINCIPLE OF EVIL MADE FLESH on an unsuspecting world, consequently landmarking themselves at the forefront of the extreme music movement. With their writing becoming more fluid, more confident, DUSK AND HER EMBRACE… THE ORIGINAL SIN is the precursor to the band’s sound as it is today, and a must-have for any extreme music fans.

DUSK AND HER EMBRACE… THE ORIGINAL SIN will be available to pre-order from 30th May.