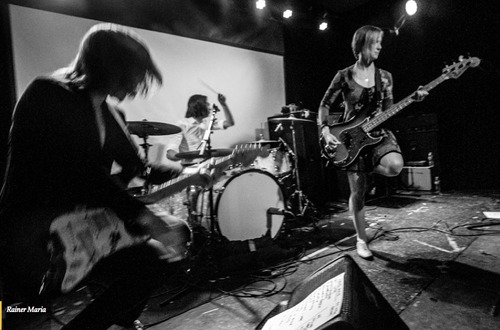 Longtime musical collaborators Kyle Fischer (guitar, vocals) and William Kuehn (drums) began writing a new batch of songs in the late summer of 1995, thinking they lacked only a bassist. When they found Caithlin De Marrais (vocals, bass), they knew they had found a uniquely captivating voice to front the band as well.

Fischer and Kuehn had met at all-ages shows in Madison, Wisconsin, where Kuehn was cajoled into replacing Fischer on the drums in Ezra Pound (with Matt Tennessen of Pele). Fischer switched to guitar, and the two departed together a year later in search of broader sonic horizons.

Meanwhile, Fischer had met De Marrais in a University of Wisconsin poetry workshop where the two had organized extra evening sessions of the class and soon found they were the only ones attending. Here they wrote the poems that would later become songs on the band’s first album.

Rainer Maria’s various releases began mapping their trajectory. The original demo cassette, a run of 350 now long out of print, documents the excited initial efforts of a band just 6 weeks old. Their debut self-titled EP appeared on Polyvinyl as a result of the experience of early tours, playing house shows or all ages “spaces” from Austin TX to Kent OH, even a double-wide house trailer in rural Mississippi packed with 100 melting kids. With the New York, 1955 single, the band began experimenting with what happened when they turned the volume down.

Past Worn Searching, Rainer Maria’s first album, signaled the beginning of Rainer Maria as a full-time band. Recorded at the sweltering hot, now defunct Ghetto Love studios in Chicago during the summer of 1997, Past Worn Searching and its stripped-down production ushered the full arrival of dueling vocals, sonic excess, and youthful exuberance. That fall, Rainer Maria toured the entire continental U.S. for the first time—more than 50 shows booked by Kuehn himself, including a west coast tour with Braid.

The band’s second LP, Look Now Look Again, was released in April 1999 to the open arms of fans and critics alike. Stellar reviews and write-ups appeared in The New York Times, Alternative Press, Magnet, CMJ, and The Village Voice to name a few. Rainer Maria appeared in Spin three times in the latter half of 1999 and Look Now Look Again was named one of the magazine’s 20 best records of the year. The band would go on that year to record and release Atlantic, a three-song CDEP recorded at Pachyderm Studios (P.J. Harvey, In Utero) in August. Just days later, the band relocated to the East Coast.

Rainer Maria then spent the better part of a year holed up in a converted cow barn, the previous home of Pepperidge Farm Bakery’s original dairy farmer. There, they wrote their third and most ambitious album, A Better Version of Me, which was released in January 2001. The album hit the #1 spot on CMJ and was supported by a relentless tour schedule of over 200 shows.

In fall 2002 the band again returned the studio to record Long Knives Drawn, their fourth album. As a teaser, the Ears Ring EP appeared in early November 2002 and was the band’s first new material in over a year-and-a-half. Two months later Long Knives Drawn was released and the band embarked on a two month tour with Mates of State followed by a mini-tour in Canada, and then a tour with Denali.

Next up for Rainer Maria was a three week tour with Coheed and Cambria in support of Anyone In Love With You (Already Knows), a DVD/live CD combo release. The DVD features the band’s March 2003 Cat’s Cradle show filmed by members of Bifocal Media (Braid Killing a Camera, Michigan Fest 2002). The bonus audio CD features selected various live tracks the band had been accumulating over the years. Anyone In Love With You (Already Knows) was released on March 9, 2004.

After almost three years of writing, recording and mixing, Catastrophe Keeps Us Together was released in April 2006. Just a few months later, Rainer Maria announced that the group would be disbanding in December after a series of farewell shows in New York City. The band reunited for a New Year’s Eve performance at the Bowery Ballroom in 2014 and again at the Ground Control Touring 15th Anniversary showcase at Webster Hall in 2015. They will play select dates this summer, kicking off with a Sunday residency in June at Union Pool.

Previous Pierce The Veil Announce UK Tour
Next “Lovin’ You Will Be Easy” from Benjamin Scheuer’s “Songs from THE LION” premieres at Elmore Magazine, debut record out 6/3