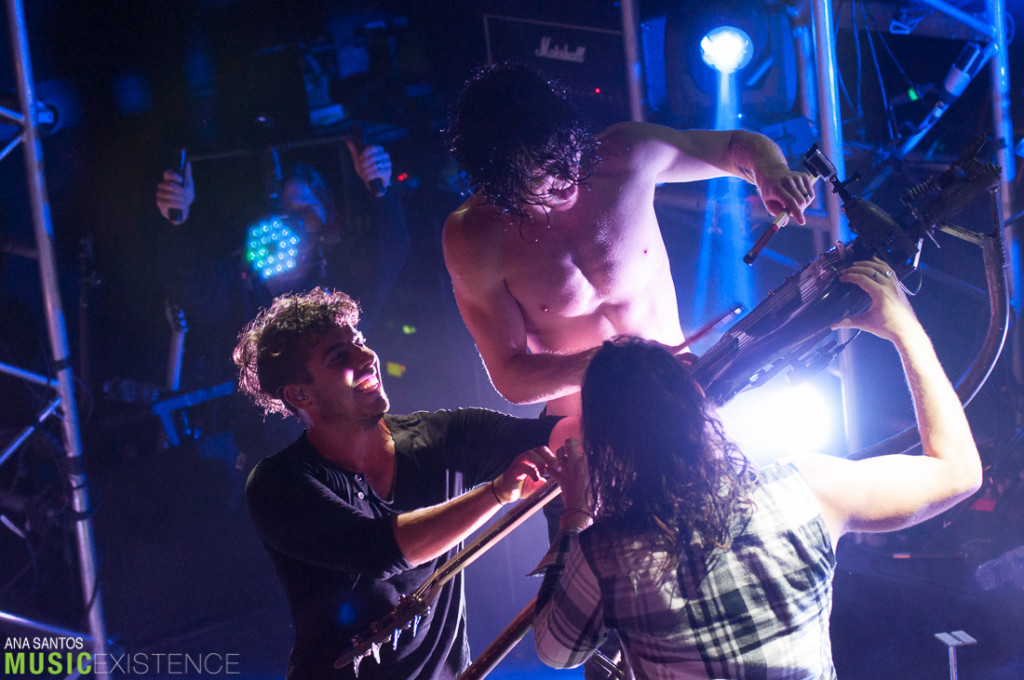 In my time covering the rock and metal bands traversing through the NYC area, I’ve discovered a great number of hidden gems. I can safely say that Nothing More is throned high at the top of the list. I was first exposed to the Texas-based quartet back in February when the band came to New York on Periphery‘s bill. I remember thinking it then – this band is going to be huge!

While the last several months have seen Nothing More’s rise in the charts due to crucial airplay on Sirius XM’s OCTANE, the band’s relentless touring and explosive performances have certainly helped. And yet, despite the undeniable talent and positive message that draws thousands to the band’s Facebook & Twitter accounts, NYC’s historic Bowery Ballroom did not host a sold out crowd this past Sunday, September 20th. That is a crime. Nothing More seems to be currently cruising that awkward phase between stardom and ambiguity. While the band may not yet be playing a sold-out headliner tour, devoted fans line up hours prior to doors for their chance at a front-and-center spot for the show of their lives. (With VIP ticket upgrades starting at only $35, you should too!)

Words can’t encompass the exhilarating experience of their performance. Raw energy would be a great way to summarize it. Their 2013 self-titled album is a testament to their songwriting. It’s their extraordinary commitment to the stage that sets them apart. There are no off nights, there is no such thing as giving it 90%. These guys bring it at 150% every single time. I’ll be honest – having seen them play their frenzied set as a 40 minute opening slot twice before, I was curious, if not a little concerned how a full-blown headline tour would translate.

There was obviously no need to worry.

Frontman Jonny Hawkins was whipping sweat across the stage as he pounded his heart out on a custom-welded drum set. Leaping and launching over risers with microphone in hand, Hawkins’ primal adrenaline surge was infectious.

Newcomer on the scene is Ben Anderson, who took over for drummer Paul O’Brien only one week before the tour kicked off, was embraced by the fans as he swept flawlessly through track after challenging track. One of the show’s highlights is definitely the band’s one-of-a-kind three-person bass solo performed by bassist Daniel Oliver, guitarist Mark Vollelunga and later joined by Hawkins. The rig was custom welded by Oliver, who devised a way for all three to perform without having their backs to the crowd. Seriously, just look at this fan-captured video from an earlier show.

If the adrenaline-riddled performance is not reason enough for you to check these guys out, then consider that this is the very last tour for the self-titled album before the band goes back into the studio. While I’m sure future performances are likely to include crowd-favorites like “This Is The Time,” “Jenny,” “Christ Copyright,” “Salem,” and “Sex & Lies”, it’s the less popular gems like “I’ll Be OK,” “If I Were” and “Take A Bullet” that make this tour a definite must. If you’ve been curious about Nothing More – go to a show. If you have nothing to do that night – go to a show. I guarantee that you’ll be a fan almost instantly.

If you’d like a more thorough experience then definitely pick up a VIP ticket. $35 gets you early access into the venue, a three-song intimate soundcheck experience, meet & greet, photo with the band and above all, the chance to meet some of the nicest, most down to earth bunch of guys on the scene.

Take a friend. Make a day out of it. Be ready to scream. You won’t regret it. (Tour dates listed below)

Check out some of my shots from the show:

Watch the “Jenny” video below and visit the band’s PledgeMusic page to find out more about how you can help minimize the mental health stigma through the #iknowjenny campaign.