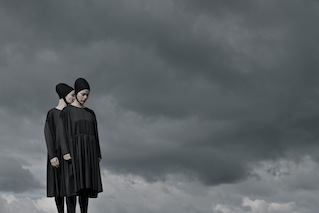 PHILIP SELWAY: NEW VIDEO FOR “IT WILL END IN TEARS”

Philip Selway has unveiled a visually striking video for new single “It Will End In Tears”. Made in conjunction with Northern Film & Media and the Berwick Film & Media Arts Festival, the video is the creation of RAMMATIK, aka Rannvá Káradóttir & Marianna Mørkøre, a Faroese film duo at the forefront of artistic filmmaking. With an experimental approach they have developed a distinctive visual identity, resulting in international recognition and awards.

The video for “It Will End In Tears” follows the release of Selway’s video for “Coming Up For Air”, a hazy, perception-altering visual offering that accompanies the hypnotizing majesty of his new album Weatherhouse’s lead track.

Both “It Will End In Tears” and “Coming Up For Air” are included on Selway’s second solo album, Weatherhouse, which will be released October 7 on Bella Union. Preorder Weatherhouse here.

Selway will make his United States television debut on The Tonight Show Starring Jimmy Fallon airing October 9 at 11:35pm EST on NBC. During this performance, he will be joined by the legendary Dap-Kings to perform Weatherhouse material.

Stephen Vicino is the founder of MusicExistence.com. He created this site to give talented musicians a voice and a way to be discovered.
@@svicino
Previous Bad Luck Announce New Tour with Let It Happen and Old Again
Next EMILY WOLFE To Release New EP, “Roulette” on Oct. 7th