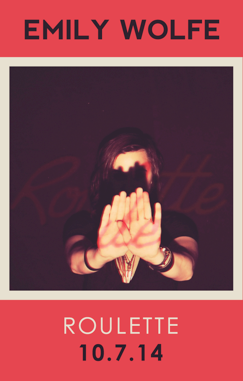 Named one of NPR‘s 5 New Bands To Watch At SXSW in 2014, Emily Wolfe‘s creative songwriting keeps her fans aglow thanks to her strong, powerful lead vocals and dominating guitar style. Her keyboardist and backup vocalist Hannah Hagar along with instrumentally indispensable Sam Pankey (bass) and Jeff Olson (drums), hold the band’s rhythm section which provide the solid groundwork to allow Emily’s lyrics and guitar-work to glide atop.

Emily Wolfe transcends the ranks of ordinary musicians. With versatility all her own, Wolfe’s ability to transform from rock and roll fireball into intimate acoustic songwriter truly separates her from the pack.

Stephen Vicino is the founder of MusicExistence.com. He created this site to give talented musicians a voice and a way to be discovered.
@@svicino
Previous PHILIP SELWAY: NEW VIDEO FOR “IT WILL END IN TEARS”
Next NIKOS New Self-Titled EP Out October 21st | Pre-Orders Available NOW