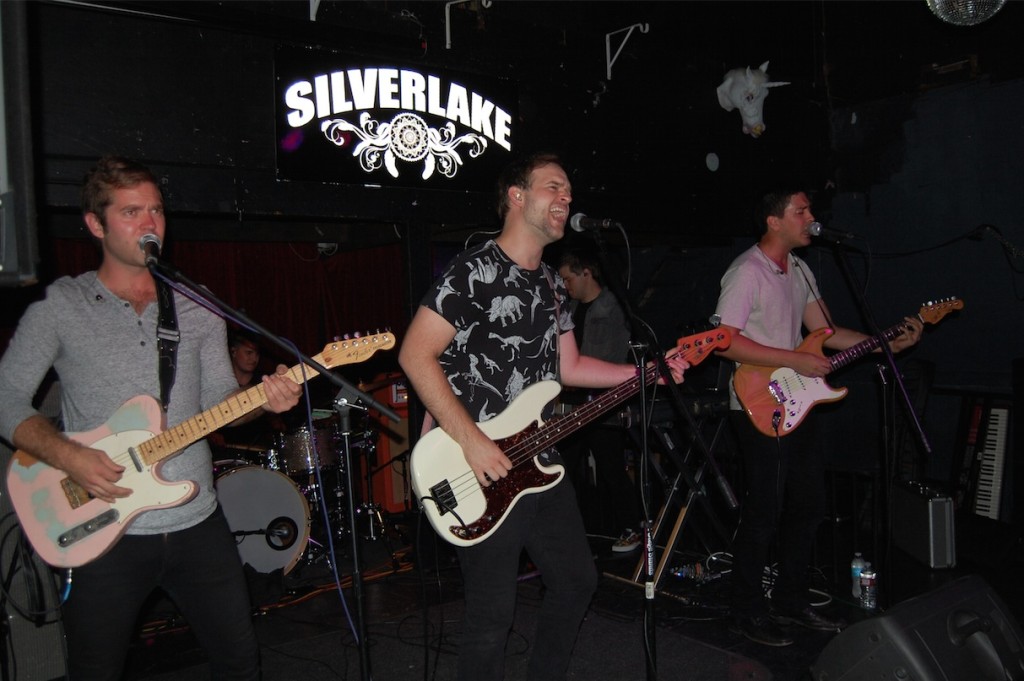 The Bolts Transformation Into Island Apollo at Silverlake Lounge

Orange-County based indie rockers The Bolts made a bold move early last month—they changed their name to Island Apollo. Bolder still, the five-some headed north to hipster haven Silverlake  previewing work through their new material as Island Apollo, taking up residency at the gritty Silverlake Lounge for four Mondays in July.

The band—comprised of guitarists Heath Farmer and Ryan Kilpatrick, bassist Addam Farmer, keyboardist Austin Farmer, and drummer Matt Champagne—gained considerable fame as The Bolts after forming as teenagers in Orange County.  In short order, they picked up airplay on KROQ, won Orange County’s “Best Pop Artist” from the OC Music Awards, opened for Capital Cities and Third Eye Blind, appeared across local TV and, realizing every young man’s dream, had a song placed in a commercial featuring supermodel Kate Upton.

At Silverlake Lounge, the group took the stage as relative newcomers.

From the first show through the last, Island Apollo was not what you’d call tentative.  Despite the new name (coined for the artificial islands in Long Beach Bay, each named for a Apollo astronaut) and brand new material, they couldn’t shake off (nor should they) the experience of seven years playing together.  Island Apollo plays with astonishing precision and considerable verve. They’re tight but not tense, intense but not intimidating. Each member knows their job and does it well, and their experience shines through in confident assured playing, compact, well-crafted songs, and at the bottom of each, Matt Champagne: throwing himself all over his small drum kit (with one synth pad, he’s quick to point out), each bang of the drums exuberant—at times it seems he just might freak out—before bringing the beats back to their “proper” place.   In fact, each song finishes a little sooner than you think it should.  A few of the songs hint at what might be in store if they were to shake off the disciplined structure and show fans what it might feel like to be invited into one of their private jam sessions.  Watching the crowd, it was clear that each song left the audience wanting more.

If one is to believe the set lists (show-goers eagerly snatched from under Heath’s feet at the end of each gig) during the Silverlake Lounge residencies consisted of eight-song sets of original compositions the band has been working on for inclusion into their first EP as Island Apollo. He told the audience, “We think Animal is going to be our fist single, but our manager (Dan Catullo, of Orange County production powerhouse DC3 Music/City Drive Entertainment) asked us not to confirm that.”  Regardless, our money’s on Animal—it’s a self-effacing excuse for love and lust, delivered with Ryan and Heath’s guitars over urgent, insistent, almost drill-cadence harmonies.

Heath and Ryan trade lead and rhythm guitar duties effortlessly, going back and forth between parts without looking at each other. Heath wields a well-worn Telecaster, showing years of love and long use along with that very sweet, country punk-tinged sound; he expands on its single pickup design and sound with an array of pedals and effects at his feet that makes the gear lovers in the audience crane their necks over the monitors to look at it.

Ryan, Island Apollo’s newly appointed lead vocalist, croons a fine tenor over his Stratocaster, fixing his gaze on the audience as he works through the tunes. Their intention was to have Ryan handle all the singing—thinking perhaps their four-part harmonies as the Bolts too lightweight—but they simply can’t help harmonizing, and you can tell they clearly relish singing together. Each song’s chorus is fist-to-the gut punchy. They pack a pop and a wallop.  This is especially evident on the tunes Phoenix and Animal.

Between them is Addam, alternately strumming and plucking his bass—just like the guitarists on either side of them. Twice during the residency, he sported a black t-shirt with dinosaurs on it, and the irony wasn’t lost on fans of Animal.

Habitual starts with a looser, free-form instrumental intro reminiscent of The War on Drugs—but again, tantalizingly brief.  In Meaning of Love, the guys sing, “You build me up/And break me down/That’s the meaning of love/That’s the meaning of love.” It is then that you realize: these guys are not punks; they really are a bunch of Orange County lads, tanned, fresh-faced, and very outgoing.  They want us to like them, and y’know what? We do.  The band reads the audience well and knows that they won’t win us over if they sing at us to fuck off.  It’s refreshingly…fresh.  At each week of the residency, a tanned, teeming crowd of young ladies in the audience undoubtedly seemed to agree.

Believer is as close as these guys come to down-tempo in the Silverlake sets, a minor-key anthem driven by Austin’s low-key keys, his extensive rig anchored by a Yamaha electric piano. In I Don’t Need Your Kind of Love, they build guitar energy with staccato guitar riffs around their vocal, ensemble playing holding Champagne’s drums in check, concluding with soulful, tight harmonies on Think it Over, their last number.

Heath explains their carefully constructed set after the show.  “We believe that every song should flow naturally and that every detail should serve an artistic purpose. We added tempo changes where it made sense, and explored varying chord progressions.”  As you watch his fingers fly up and down the fret board, you realize he’s taking his own advice well.

So with a nostalgic look back at their history as the Bolts, Island Apollo is poised to rise above the ocean floor and reach for the stars.

Stephen Vicino is the founder of MusicExistence.com. He created this site to give talented musicians a voice and a way to be discovered.
@@svicino
Previous Album review: We are Castor – Invade and Disco
Next Lana Del Rey – Summertime Sadness (Noise Killerz Remix) it’s an Melodic Dubstep Remix