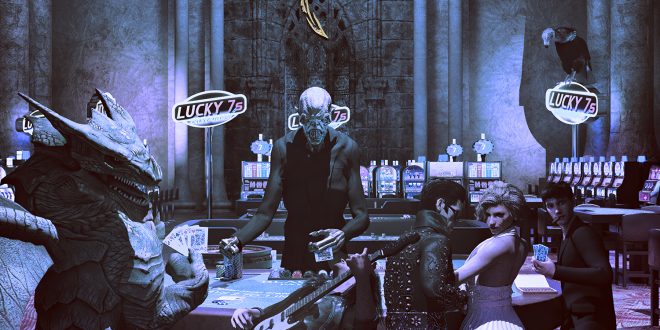 Desert Dragon is set to release their new album, This Side of Heaven on all digital and retail platforms on November 11. The band’s first release with vocalist Keith St. John. Making up the rest of the band is Greg Patnode and Brent Barker on guitar, Rick Brandt on bass, Lenny Roberto on drums, and Michael Smith on keyboards. “We decided to go a little heavier on this album to get a little more energy,” says Patnode.

Desert Dragon vocalist St John is well known in the rock world for his time in Montrose, Lynch Mob, and currently, Kingdom Come, Burning Rain, and the Raiding the Rock Vault production on the Las Vegas strip. St John cowrote and coproduced the This Side of Heaven album with Patnode and Smith and considers this record to be “au natural and straight from the heart.”

The band has been making a name for themselves with their multi-rock sound which includes a mix of classic rock, blues rock, country rock, and progressive rock. This Side of Heaven features ten new songs that highlight a different side of the band’s talents on every track, while they salute good old fashion rock. On the album violinist Adel Eskander (Page and Plant No Quarter Tour) lends his talents to the song “Southside Of Heaven”.

Since their debut in 2011, the band has independently released the EP Desolation which was produced by the legendary Ron Nevison (Led Zeppelin, Bad Company, The Faces, Heart, Lynyrd Skynyrd) and featured Billboard charting singles “Darkness Shines” and “Miles Away”. For their album Before The Storm, the band worked with Producer/Mixer James “Jimbo” Barton (Queensrÿche, Rush, Metallica) with the song “Save My World” garnering Best Rock Song at the Malibu Music Awards.

Desert Dragon has also toured relentlessly including an opening slot for Blue Oyster Cult and a capacity show at SXSW. When asked about the name Patnode explains, “Desert comes from the Judas Priest song Desert Plain and Dragon was inspired by Jimmy Page’s iconic dragon pants”.

Stephen Vicino is the founder of MusicExistence.com. He created this site to give talented musicians a voice and a way to be discovered.
@@svicino
Previous CROONER JRU ANTHONY PREMIERES VIDEO FOR “97 CHEVY “ LIFE FOR NOW LP IS OUT NOW
Next Keep Your Heart Open – Sweet Song About Kindness And Keeping An Open Heart