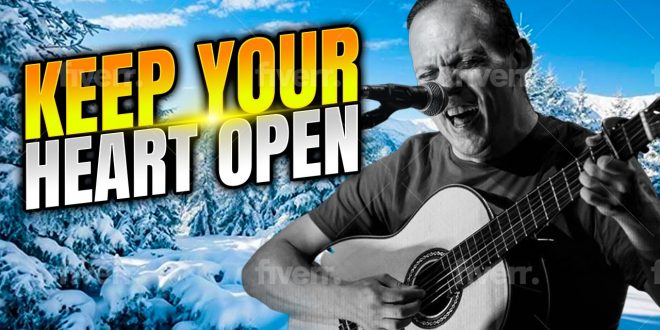 This is my latest cover and translation into English of the poet Bulat Okudzhava. I translated a number of his songs into English. Those songs and their analysis can be found on my full page with Bulat Okudzhava songs in English.

This song focuses on the idea of keeping an open heart through life’s challenges. It’s easy to let it close or to get protective of it. But it becomes harder and harder to open your heart again. This song is a sweet and gentle reminder to keep your heart in the right place. It’s not intense in its sound, but the energy of the song comes from strong imagery and relatable ideas about life.

My Experience With This Sweet Song

I first came across this song about 20 years ago. This wasn’t one of Bulat Okudzhava’s hit songs, and I discovered this song later than I discovered his other songs. But the song immediately inspired me because in the original lyrics, there was a juxtaposition of keeping fire in your heart going as much as the fire in the fireplace. In English, this doesn’t have a ring to it, but in the Russian original it did. This song has great imagery, and it’s one of my favorite songs with great metaphors. It also quickly became one of my favorite inspirational songs.

This song left quite an imprint on my life, and as great songs often do, it lived in me for a long time. Perhaps it did help me keep my own heart open because it made the idea of doing such a thing seem as one of the most important things, and certainly keeping my heart open has been an area of my focus.

Musical Arrangement Of This Sweet Song

Musically, this song doesn’t have many instruments. There are no drums, and the main instrument is the guitar. The vocals in this song are intended to sound earnest and sincere to give the effect of amplifying the message of the song as though there is something important that’s being communicated.

The Poetry In This Song

Stephen Vicino is the founder of MusicExistence.com. He created this site to give talented musicians a voice and a way to be discovered.
@@svicino
Previous LOS ANGELES ROCK BAND DESERT DRAGON TO RELEASE NEW ALBUM THIS SIDE OF HEAVEN OUT ON NOVEMBER 11 THE FIRST WITH VOCALIST KEITH ST. JOHN (MONTROSE, LYNCH MOB)
Next Hardcore Punk Band Releases New EP