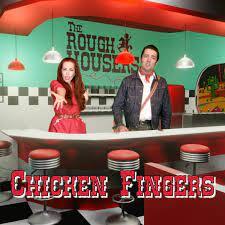 With a sway that feels like it just swung off of Route 66, The Roughhousers strut through “Chicken Fingers” with a swagger that just might be more powerful than any other I’ve listened to in indie music this year. They’ve got plenty of reasons to be arrogant here, but their cockiness never drifts into that territory; contrarily, they’ve got such a pleasant demeanor that it’s no wonder why kids with discerning taste have been falling head over heels for their music recently. “Chicken Fingers” looks poised to be another successful release, and I see why.

The music video for this song has a nice whimsical identity that feels both innocent and charmingly simple, both of which can appeal as much to younger audiences as it would adults, and if you’re interpreting the lyrical content here from any position other than the straightforward, there’s a yearning that extends itself to the rhythm of the music quite beautifully. You can say what you will about most artists that make songs specifically for kids, but The Roughhousers are in a different category altogether – they’re appealing to those of us who like to keep a good set of speakers in the living room for all of the family to enjoy.

“Chicken Fingers” was made for the children, but it can be a fun listen for just about anybody who likes rockabilly that isn’t weighted with pointless synthetics. For the past year or so, The Roughhousers haven’t been able to escape the good press their music has been getting, and between the vocal Grey DeLisle is slinging and the string play Eddie Clendening is offering up once again in “Chicken Fingers,” their sound is still going strong here. I want more of this, and I’m getting the idea that I am far from the only fan saying so.