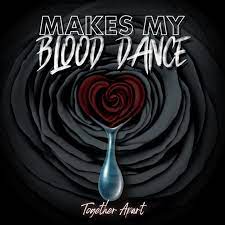 Pouncing on us with everything they’ve got, Makes My Blood Dance is ushering in another layer of brutality with the release of their new single “Together Apart,” a track which immediately brings to mind the shock rock of Marilyn Manson and Nine Inch Nails with an added dose of melodic charisma. Don’t get me wrong – the heavy-rocking Makes My Blood Dance is still buried between the verses of “Together Apart,” but here, they’re being the gothic version of themselves they always should have been from day one. It’s an awakening for their sound, and easily their best single to date.

You don’t need to see the vicious music video for this single to appreciate the increased focus on post-punk adrenaline in “Together Apart,” nor the industrial feel to the lead vocal. Honestly, while I like the visual setup for the video, the song is already so imagistic that it feels almost indulgent to take in the on-screen chaos beside the might of the music. This isn’t the depressed goth sound of a no-wave ‘90s scene, but instead something horrifically colorful and brutishly vibrant, which is bound to be appealing to fans of the surreal pop movement as well as traditional rockers.

In their latest single, Makes My Blood Dance turns a corner that I didn’t know this band was going to be ready for in 2022, but they’re storming the gates just the same. Their energy makes me very excited to hear what their future work is going to sound like, and at the moment I think it’s quite obvious that they’re one of the hotter indie rock insurgents that fans of the underground should be paying very close attention to. “Together Apart” is the new standard, and I look forward to seeing them try to top it soon.