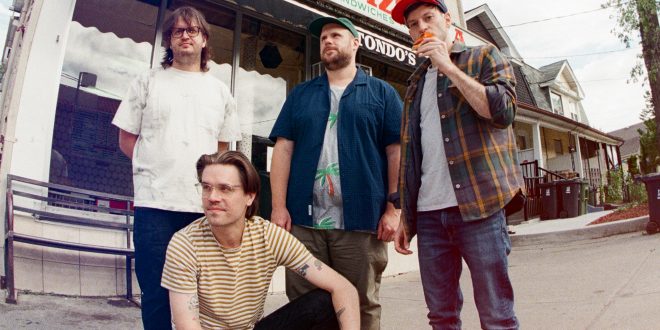 Toronto punk heroes PUP will release their incredible, ambitious and aptly titled fourth album, THE UNRAVELING OF PUPTHEBAND, next week on April 1. Following the previously released “Waiting,” “Robot Writes A Love Song, and “Matilda,” PUP have shared one last single before the entire album drops next week.

Accompanied by one of the Greatest Music Videos Of All Time™, “Totally Fine” is a hilariously self-lacerating track with an undeniable chorus that offers plenty of opportunities to open up the pit. The track features Mel from Casper Skulls on vocals, with Sarah from Illuminati Hotties, Kathryn from NOBRO and Erik from Remo Drive on the gang vocals. Watch PUPTHEBAND Inc. get away with their criminal business dealings in the Jeremy Schaulin-Rioux directed video for “Totally Fine” below.

“We wrote ‘Totally Fine’ after a long creative drought. We all agreed to take a break from PUP during lockdown, to take some time to deal with our mental health and get some space from each other. After 3 months of not writing any songs, ‘Totally Fine’ was the first thing to pop out. It broke this creative dam wide open, just months worth of pent up frustration all smashed into this one song. After that, we ended up going on a bit of a tear and wrote the rest of the record really quickly. The drumming on this song still blows our minds. It’s so manic and wild and makes the song feel like it’s about to fall apart at any moment, which is kinda like how it feels to be in PUP.”