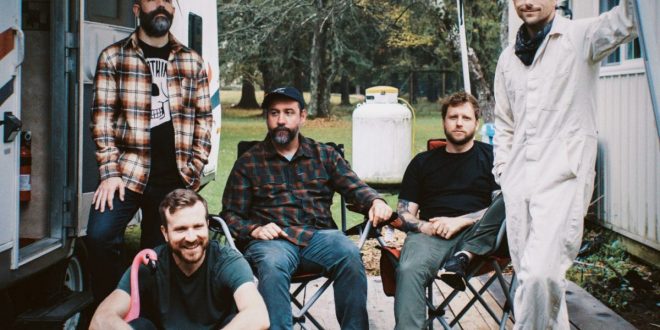 Late last year, Philadelphia’s Circa Survive released A Dream About Love, an atmospheric, electronic-leaning EP that BrooklynVegan called “one of the band’s most drastic departures yet.” It came as a result of a band entering their 17th year together amid global upheaval and personal renaissance, forcing its members to find new ways to challenge themselves and stay true all at the same time.

Today, Circa Survive announces A Dream About Death, a second EP of all-new boundary-pushing music from the beloved alt-prog/post-hardcore giants. It’ll be out everywhere on February 4, but today the band has shared its powerful opening track, “Electric Moose. It kicks off a whole new era for Circa Survive: one that’s more bold, avant-garde, and honest than ever.

“Electric Moose” is also one of vocalist Anthony Green’s favorites on the EP. “I really love this song,” Green explains. “It actually came together after we were finished the writing process. The other songs were sent off to mastering already. This one came together very organically and we loved it so much we had to include it. ”

The lyrics for “Electric Moose” actually started out as a poem that he wrote about domestic abuse, and someone trapped in a relationship but trying to hold onto the thought of how it was before things became violent. Its video, directed by Katherine White, follows a similar story, utilizing an intense dance performance to capture the sentiment behind the song.