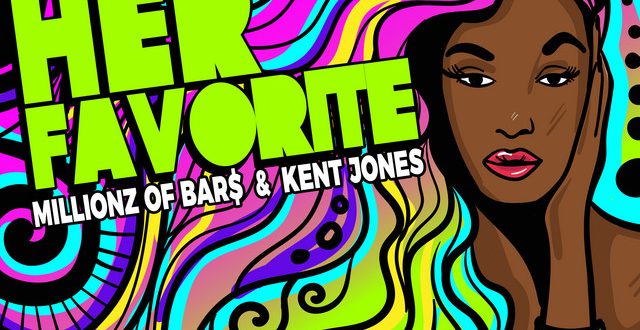 If a single is to be defined by its signature groove, the new track from Millionz of Bar$ and Kent Jones, “Her Favorite,” is definitely a song that was made with getting bodies closer together on the dancefloor in mind. There’s nothing separating the bass from the drums in this sultry, upbeat slow jam, and although it features epic rapping from Millionz of Bar$ and some sophisticated crooning from Jones, I think the instrumental aspects of this composition are what make it worth writing home about. Structurally speaking, this is the best demonstration of its creators’ talents to debut thus far.

The harmony that Kent Jones is putting up in the chorus here is a straight throwback to the ‘90s R&B that came to shape an entire era in pop music and then some, but it doesn’t feel out of place next to the progressive construction of the verses at all. On the contrary, I would have to argue that it makes the words feel a little more intimate than they already would have, which essentially seals the deal in the climax of the track and leaves our leading man plenty of room to cut into his lyrics like a hot knife through butter.

Despite the old-fashioned arrangement, the beats and the actual delivery we’re getting from Millionz of Bar$ are pretty fresh, suggesting an interest in crossing over with some of the looser trap mixes that I’ve had the pleasure of listening to in the past couple of months. You can tell that we’re not listening to a rapper who puts a lot of stock in synthetics or dropping unnecessarily melodic 808s for the sake of being edgy; he wants some soul in the bones of this performance, and that’s why he chose the collaborator he did.

There’s a funk influence over the bassline, but I like that it isn’t being overstated in the grander scheme of things – quite the opposite, truth be told. If anything, the bass is buried beneath the thrust of the percussion as it clashes with the more melodic vocal Jones is hoisting into the spotlight like a flag of friendship for us to come running towards, which isn’t exactly a formula that I’ve been seeing or hearing much of on the mainstream side of pop music recently. These guys dare to be different, and you’ve got to give them their due props for doing so.

Although slightly reminiscent of the hybrid content artists like Seattle’s Ronnue have been experimenting with in the past three years, Millionz of Bar$’ “Her Favorite” has a radio appeal that is undeniable here, and I think it’s going to bring a lot of affection for the brand he’s establishing on the underground side of the dial in 2022. Kent Jones holds up his end of the performance brilliantly, and with any luck, I hope to hear these guys sharing both the studio and a live stage at some point again in the very near future.