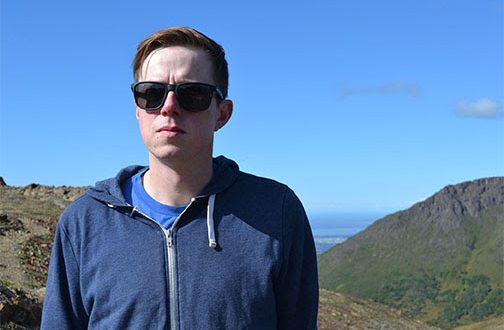 Parker Longbough’s Off Front Street is the singer/musician/songwriter’s third release this year. Each occupies distinct musical territory; the first Crackle/Hiss explored electronica while Longbough shrouds its successor 246 Tapes Volume 1 in home technology and a pronounced DIY feel. Off Front Street steers his songwriting in yet another direction  The eight songs included on this album have a commercial orientation unheard on the earlier releases but “commercial” means different things when discussing Parker Longbough’s work.

Accessible is, perhaps, a better word. The production is self-consciously stripped down like his 246 Tapes Volume 1 project and doesn’t have much appeal for mainstream listeners. It does, however, lean on customary time signatures and typical instruments. Longbough proves willing though to subvert listener’s expectations and it provides an idiosyncratic spark to the songs lacking from lesser performers. I hear it from the first song on.

Longbough opens the release with its title song. This is often a signal of an artist’s confidence as they are leading off with what is, traditionally, an album’s most substantive musical statement. I will leave it to others whether or not the title track is the best but it is definitely an pivotal cut. It falls into two predominant camps on Off Front Street – “lighter” numbers with a broad-based musical approach along with other tracks, such as this one, mixing furious distorted guitar with sometimes glazed-over tempos and vocals.

The measured timekeeping forming a foundation for “Please Come Over” is among the album’s best performances. It has minimal instrumentation, essentially revolving around those drums and compositionally minded keyboards, but its supportive of the vocal rather than its equal. Percussion, however, has much more physicality than the keyboards/synths. The lyrical detail in the song is a sort of near-Skid Row poetry, carried by its moments of specificity, and Longbough’s voice breathes life into the work.

Lou Reed, particularly his mid-late 70’s incarnation, seems to be an unheralded influence in Longbough’s music. The vocal for “The Falcon Sleeps Alone” reminds me a great deal of how the late and lamented Rock and Roll Hall of Famer might have approached the performance. It has an unusual tempo and slightly jarring musical arrangement but, nonetheless, has surprising appeal. “Cause You’re Worth It” has a different sonic character than the album’s other songs though it never ventures outside Longbough’s wheelhouse. Drumming and other parts of the arrangement possess an unique near-mechanical flavor. It doesn’t cast a chill over the song, however, and even has a curious white-hot texture.

“We Missed the Exit” is clever and deeply felt. Parker Longbough closes Off Front Street. It’s another insular Longbough lyric covering unlikely subjects. The song is, in the end, about life’s capriciousness. He superficially concerns himself with a speaker telling the story about how a gorilla saved their life and dismissing anyone who doesn’t believe them. It’s in keeping with the spirit of his new album. Off Front Street blazes its own path taking what it needs and discarding the rest and I expect he will continue doing so for many years to come.