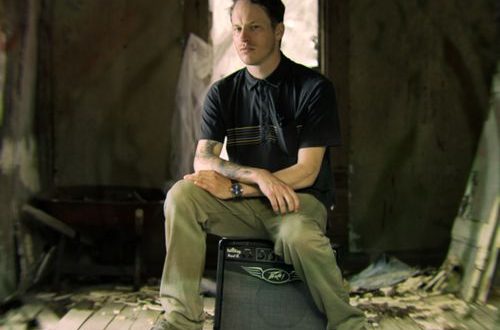 New York born, North Carolina based singer/songwriter Hank Close’s first album under the Hank! moniker, Guilty Pleasures (Are the Best Ones), ranks high as one of 2021’s best musical surprises. It isn’t a news flash that Close, a longtime talent in the indie music world, boasts an enviable and impressive list of past credits.  Hank!, however, finds Close standing on his own creatively in a way he never has before. The woozy and slightly out of tune opener “Twitch” opens the album on a memorable note.

It is reminiscent of Neil Young and Crazy Horse at their most raucous. The turgid pace of the track gives it molasses slow evolution, but admirers won’t mind. Close’s vocal bray is much more punk in spirit than the remainder of the song. The track seems to be setting listeners up for a long duration but ends well shy of the four minute mark.  “1000 Fools”, the album’s second cut, is essentially a souped-up folk rocker. Its effective yet rudimentary structure is the sort of song you can hear Close banging out in demo form on an acoustic. There’s an inherent guitar-heavy aesthetic present in the opening duo but they have very different tempos.

Close takes another turn with the track “Lady St.”, but it veers into recognizable territory. It owes an enormous debt to New Wave, but Close dirties it up and the song has ragged gravitas early on. “Lady St.”, like its predecessor, is electrified folk at its core though nonetheless convincing. Attentive listeners will catch a faint Pink Floyd influence wafting through “Bogged Down” in its melancholic harmonies and the vocal but its isn’t too pronounced. The double-tracking applied to Close’s lead vocal isn’t needed, it’s effective singing on its own. It never mars the performance, however.

“Stupid Teens” is one of the album highlights and illustrative of Close’s idiosyncratic gifts. His songwriting doesn’t remake the wheel, that’s true, though it has something especially crucial – he addresses listeners with his own voice. You’d confuse him for no one else. It’s one of the album’s singles for a reason and Close’s mixing of its tempos is potent, never gimmicky. The brisk bounce of “Why Go” returns Close to the territory he explored during “Lady St.”. It has more diffuse melodic virtues, however. It is a fine performance, however, and coming near the album’s end is a perfect spot for its inclusion.

“Mood Swings” ends the release on a compelling note. It mixes the best aspects of Close’s artier inclinations with his desire to rock out. Listeners, of course, cannot ignore the quasi-autobiographical slant of the material as well. It’s a persistent quality throughout Guilty Pleasures (Are The Best Ones) as well as the slightly skewed, off-kilter feel driving many of the songs. There isn’t a single track included on this album you’ll regard as filler though some are, naturally, stronger than others. Hank! is the first of what will likely be more than an one and done but, even if it is in the end, this eleven song collection will linger in your mind long after the last note fades.

Tags Album Review guilty pleasures are the best ones hank!