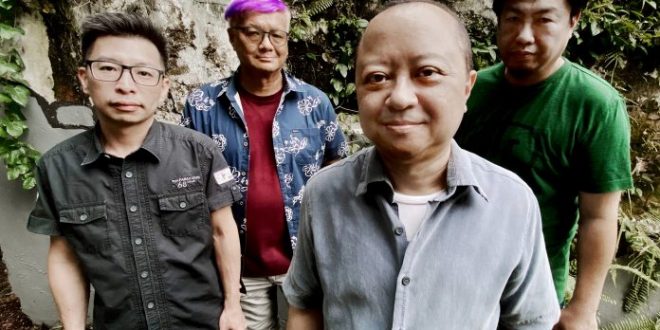 Back in July, Singaporean quartet The Oddfellows delighted listeners with a succinct retrospective, Up in the Clouds: The Best of the Oddfellows (For Now). The best-of album marked their debut on streaming music platforms, highlighting the most notable cuts from their two classic albums, 1991’s Teenage Head and 1992’s Carnival, as well as compilation contributions. However, it would also serve as a teaser for new material, and last Friday, “Silent Worlds,” the band’s first single release in 29 years, has not only sustained The Oddfellows’ stature as an influential local band, but one deserving of international recognition. It will carry the band’s long-anticipated third full-length, What’s Yours and Mine, confirmed for release September 24th.

“Silent Worlds” is the first of two original songs written and sung by second guitarist Kelvin Tan, which is a nice change. The band’s last album was completed all the way back in 1992, and it is refreshing to experience Tan, who was considered new blood at the time of Carnival’s recording, implemented in an active role, essentially picking things right up from where they left off. In fact, the entirety of What’s Yours and Mine is done in close collaboration, making its rollout especially poignant. Usual lead vocalist Patrick Chng takes a supporting role on the single this time, but he, alongside bassist Vincent Lee and drummer Johnny Ong, contributes substantially to its warmth, as well as reinstates the band’s signature melodic, feel-based foundation. With a modern, organic production approach shaped by both home-based and conventional studio efforts, the song’s qualities are seasoned and flow naturally. Carefully-crafted power pop traces are shown through each chord sequence, while a grounded patience characterizes the drums. From a thematic standpoint, the song similarly centers around maintaining patience during a time as trying and contentious as Covid, while it also speaks volumes about where the band is at this point in their lives. They appreciate any and all forms of opportunity, while taking one step at a time. Considering the single as a whole product, one of the subtlest, yet most resonant takeaways about The Oddfellows in their current form is that they’re able to sound like a brand new band, even with the knowledge and experience from their over three decades as a collective and team of close friends.

I come from a family who is passionate about all things music. I learned to sing at an early age, and by 13, had my very own Fender Strat guitar. I tried my hardest at learning all that I could. Because I was born with cerebral palsy, I had to teach myself an adaptive playing style. I learned to write and record my own music, despite these difficulties. In college, I started making great use of my writing abilities by reviewing music, as well as copy editing. I guess it's best to stick with what you know, while welcoming a fair challenge at the same time.
Previous Electronic Music Producer Releases New Instrumental EP
Next Single Review: Nied’s Hotel Band “The Day The Lady Cried”