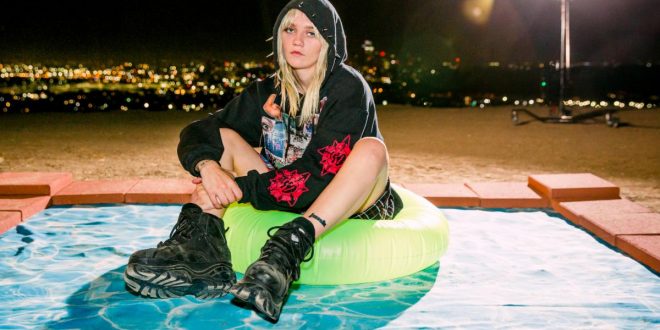 Carlie Hanson releases new song and video “Off My Neck”

Today, alt-pop artist Carlie Hanson has let loose a new track and video titled “Off My Neck.” In typical Carlie fashion, the track is a catchy pop song, although “Off My Neck” bears a bit more edge as Carlie channels the frustration of a soured friendship into both the song’s lyrics and sonics. The music video, directed by Ryan Baxley, is backdropped by a panoramic view of Los Angeles as Carlie performs along to lyrics like “you said the city wouldn’t change you / look at the monster that it made you.”

“’Off My Neck’ is about a friendship that goes sideways and how you want to escape your own brain just to stop thinking about it – especially when it’s someone you thought would be in your life forever,” said Carlie.

Tomorrow, Saturday, August 14, Carlie will be performing a sold-out show at The Moroccan Lounge in Los Angeles, which is also her first headlining show since the beginning of the pandemic. She’ll be performing “Off My Neck,” fan favorites, and songs from her second EP, DestroyDestroyDestroyDestroy, which has clocked in over 53 million streams since its October 2020 release. Carlie has also partnered with the ultra-hip shopping platform Depop around “Off My Neck” with a special fan giveaway announced earlier this week exclusively on Carlie’s Depop page.

The now-21-year-old released her debut EP, JUNK, in June 2019. Before even turning 20, she had toured with Lauv, Troye Sivan, Yungblud and others in the US, Europe and Australia, signed a deal with Warner Records and released JUNK. Named a VEVO DSCVR artist, Carlie also has fans in superstars like Taylor Swift and Demi Lovato. She has passed 164 million total global streams with her music and last year, performed on The Late Show With Stephen Colbert. She is currently working on her forthcoming debut album.

Previous Single Review: Leol “Type”
Next THE BRKN RELEASE LIVE VIDEO FOR “BE COOL” NEW EP COME OUTSIDE OUT NOW