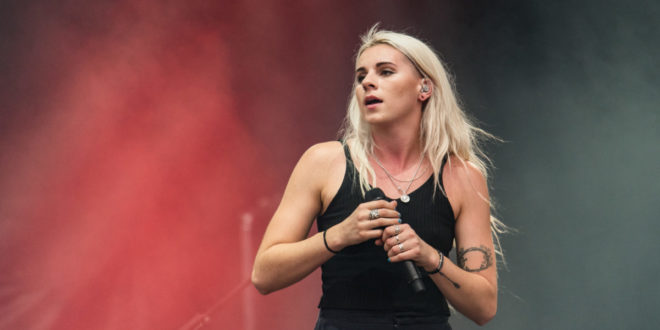 “‘Monster’ is a song about reckoning with outside opinions and expectations put upon oneself,” frontwoman Lynn Gunn explains. “It can be easy to take on the weight of negative situations/opinions, this is about the struggle of releasing those inhibitions and internalizations and returning back to yourself.”

Last year, PVRIS marked a new era with the release of Use Me, as frontwoman, multi-instrumentalist, songwriter, and producer Lynn Gunn confidently stepped forward as PVRIS’ leader and sole architect, earning acclaim from the likes of Billboard, Alternative Press, and SPIN, to name a few. That newfound sense of freedom defined the record, on which Lynn wrote, played the entirely of the guitar, drums, and bass parts, cooked up beats, and of course, sang vocals. Awash in glitchy beat-craft, airy guitars, and spell-binding vocals, the 11-track record included 070 Shake collaboration “Use Me,” explosive song “Hallucinations” plus “Dead Weight,” ”Death of Me” and “Gimme A Minute,” all brought to life by producer JT Daly [K. Flay].