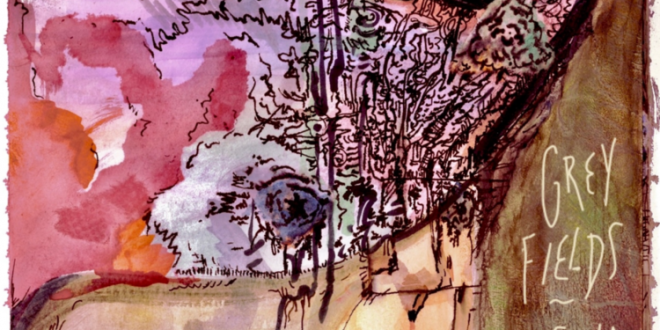 Ominously cutting into the silence in “Whistle While You Work” or grinding out a post-blues dirge in the groove-laden “Maybe My Next Day,” Grey Fields’ Vesna presents listeners with such a fetching and addictive tracklist that temptations to play it from start to finish are often too strong to be resisted. There’s rich unevenness to the construction of brooding folk-rock tunes like “Weather the Storm” and the progressive “Every Now and Then and Always,” but it’s as captivating a find as the steadiness of “Halfway Home” or the rustic “Palm Trees” is. Whether they’re juggling oddities with subtle pop influences (“The Luck”) or just reinventing songcraft for a generation Z eager to have their own beat poets to worship (“Ineffable”), Grey Fields sound like a group with an unmistakable trademark sound in this LP, and it’s one that I doubt any credible music critic is going to dismiss this summer. Theirs is a one-of-a-kind look if you’re ever going to see one in 2021, but it comes to us not as fiercely anti-establishment as it is committed to telling the tales of these musicians and no one else.

The strings are the most dominant component of charisma in Vesna, and in “Mines and Tunnels” or “Zero Sum Game,” they set up an emotional foundation that no linguistics ever could have on their own. When words can’t do a narrative justice, this isn’t the sort of band that will turn to the typical ribbonry a lot of their peers might, but instead the tempered ferocity of the instrumentation as it stands without the lens of expensive producing to get in the way.

There are blues elements to the songwriting style Grey Fields employ that I would love for them to explore just a little more than they already have, as it could bring some of the more menacing attributes to the build on “Halfway Home” out of the woodwork where we can really appreciate what they can do. This group’s riveting use of poetic contrast in Vesna had my heart from the very first time I listened to the entire tracklist forward, but if coupled with some sharpening of the other areas in their sound, this act could become downright unstoppable.

I only just found out about Grey Fields the other day, having never listened to their first album when it was released four years ago, but having now been made aware of their stellar talents, I’m shocked they haven’t already attracted mainstream hype. Vesna will admittedly dissuade the bubblegum pop crowd from taking much interest in the band, but for those of us who put a lot of stock in organic songwriting and experimental themes that aren’t just, well, a theme, what Grey Fields are developing in the studio could be one of the most spellbinding treats around in 2021. I do not recommend taking my word on this alone, however – if you haven’t already heard Vesna for yourself, its ten songs make for one of the more inspired soundtracks to any summer day.