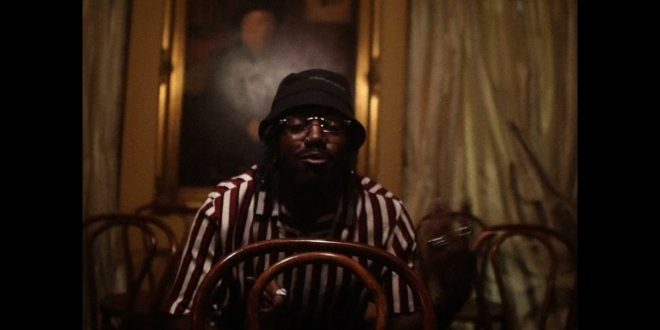 Last week, Joye Marelyn (also known as Kevin Joiner) released the video for his current single, “Woodlands.” The rapper and songwriter debuted back in 2018 with the EP, Paradise Trailer Park, and has since gained traction for his soft-spoken, melodic, and observational approach. He also emphasizes a distinct visual aesthetic as part of his brand, being featured in Earmilk, Complex, and Pigeon and Planes, and even starring in a Sprite Cranberry ad with basketball star Lebron James.

In his new music video for “Woodlands,” co-directed by Patrick Rodgers, Marelyn takes the song’s mood and aptly characterizes it with two contrasts, each focusing on isolation. The first features him in a dimly lit house turned museum in Atlanta, with complements the nuances of his vocal tonality as it ranges from tongue-in-cheek to cracked and shaky. The video’s second contrast is of serene outdoor scenery, and showcases Marelyn in a rain poncho, along with cuts to a group of intermittently appearing men who also wear rain ponchos. This may signify a sign of our current times, in that even with some semblance of freedom approaching and drawing us out of our isolating circumstances, there is still reason to be wary, and thus maintain the same degree of protection as before.

I come from a family who is passionate about all things music. I learned to sing at an early age, and by 13, had my very own Fender Strat guitar. I tried my hardest at learning all that I could. Because I was born with cerebral palsy, I had to teach myself an adaptive playing style. I learned to write and record my own music, despite these difficulties. In college, I started making great use of my writing abilities by reviewing music, as well as copy editing. I guess it's best to stick with what you know, while welcoming a fair challenge at the same time.
Previous Single Review: Sepsiss – “You Already Know”
Next Single Review: Foolish Human “Lake Union”