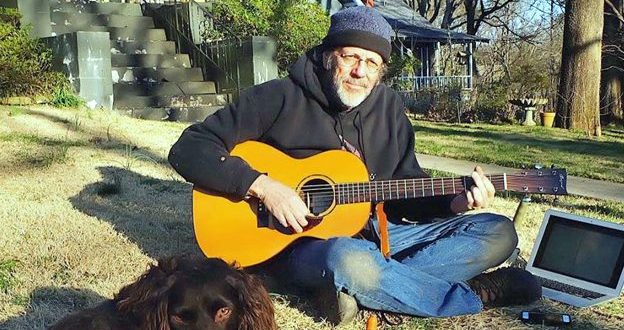 Arkansas’ Billy Jeter is currently readying himself, alongside a cadre of supporting musicians, for a much-anticipated return to live performances. His new full-length album release Shine Eye Landing gives him a full slate of new tracks ready to be incorporated into his live set. Those familiar with Jeter’s past work will likely judge the songwriting here his best yet. The time away from active touring has allowed Jeter to refine his craft; each of the album’s ten cuts highlights his skill for pouring old wine into new bottles. He doesn’t ape the past. Jeter and his musical partners never attempt note for note recreations of iconic songs, but there’s ample echoes of his influences rife throughout Shine Eye Landing.

“Orion” illustrates that point well. The loose bluesy glow radiating from the individual instruments mixes well with Jeter’s voice. He doesn’t possess the stereotypical nicotine and whiskey growl listeners often associate with this style and this works in Jeter’s favor. The melodic strengths present in his vocals throughout the album cannot be denied. The upbeat fiddle-driven romp “That’s Just the Way We Roll” is certainly one of the lighter moments included on Shine Eye Landing but doesn’t mean its disposable. This plays like a clear live favorite in the making, possibly an ideal set-opener.

“Sins of Me” has a glacial tempo that stretches its three-minute running time and a full arrangement that makes all the right turns. The track’s slide guitar is its signature element, but the percussion for a track such as this demands exquisite timing and feel. The drumming doesn’t disappoint. The album’s midway point arrives with “Cut You Down” and the light atmospherics opening the track break with the preceding tunes. Modest variations in approach are scattered throughout Shine Eye Landing and the cumulative effect of such tweaks helps give his songwriting its own identity. The chorus is, once again, a peak moment in the song.

His gift for writing memorable refrains continues with “Highwater Blues”. Gritty harmonica is present throughout the track, alternating between stuttering riffs, extended wails, and bluesy blasts. Those blasts help punctuate the lyrics’ concrete imagery and listeners will hear a genuine relish in his voice. The song’s slithering guitar lines are a final touch providing an excellent counterpoint for the harmonica. Jeter takes a classic country turn with “Spider Lilly” that reminds me a little of Gram Parsons sans Emmylou Harris. Jeter’s a fine singer, not Gram Parsons by any stretch, but they nonetheless share the same easy-going charisma. The pedal steel is graceful without ever sounding cliched.

Jeter’s taste for bluegrass returns soon enough. “Oh Lordy Me” is one of Jeter’s best traditional vocals and the toe-tapping pace he adopts suits the track well. It comes at a good spot in the album as well, the penultimate track, and gives Shine Eye Landing a final boost before its finale. Billy Jeter’s new album works its way under your skin without any big league theatrics and lingers long after its final notes fade.