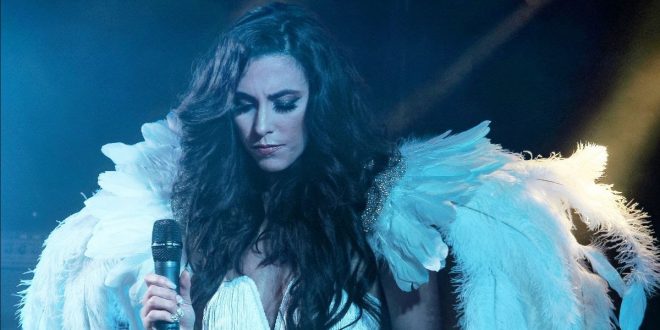 Guided by a righteous little swing but never the central draw of the track or its video by any means, the tempo in Raquel Kiaraa’s “Love to the Moon” is definitely a tension-inducing element without dispute. In the tradition of classic jazz/vocal pop crossovers, this song struts about with a swagger that immediately conjures up images of lust seconds after pressing the play button, but it isn’t dependent on its rhythm to make a big statement at all. That’s where Kiaraa’s sharp lead vocal comes in handy; without much effort at all, this crooner seems to put her stamp on any melody she sings.

“Love to the Moon” features lyrics that aren’t exactly woke by any means, but I suppose they do appeal to an old fashioned sensibility that certain listeners will absolutely appreciate. Kiaraa presents herself as a bit of an anti-feminist in the construction of the music video’s narrative, but for those who could care less about the visual subtext here, it’s still a really fine – albeit somewhat cheesy – portrayal of an artist’s sound that doesn’t fall too far from where I would have placed the summary of her current aesthetics inside the studio.

I do wish that the obvious jazz influence Kiaraa has as a songwriter were more prominent in this piece, though I can agree with critics who might argue she hasn’t had enough time to fully develop the enchanting hybrid that will ultimately become her signature style of play. I guess it’s the contrast between her on-screen cockiness and the seemingly confused nature of the composing angle that leaves me the most puzzled in “Love to the Moon,” not necessarily because of any specific flaws, but because of the manner in which they’re being put together by a young talent clearly capable of making something better.

The guitar part in this mix shouldn’t have to compete with the sax at any point for our attention, but for whatever reason it seemed like a good idea to producers to bury it beneath other components of the harmony when we definitely need its sizzle the most. It essentially leaves the lead vocal with nowhere to go as Kiaraa breaks away from the chorus, and whether this was a deliberate attempt to stir up an anti-cathartic finish in the track or not, it’s still something that comes off like an oversight (and an unfortunate one at that).

Crossover vocal pop fans can do a lot worse that the debut single from Raquel Kiaraa this February, but in my honest opinion I think this incredibly melodic young woman’s best days are ahead of her. The actual bread and butter of “Love to the Moon” is bold and colorful in the right ways, don’t get me wrong, but with the right training and space to put everything into play, I think Kiaraa has a real shot at becoming an unstoppable force to be reckoned with. Her pipes have won my endorsement, and hopefully her first proper album will as well.