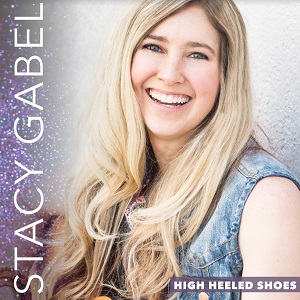 Simple to the core but nonetheless sporting a vibrant lead vocal, Stacy Gabel’s new single “High Heeled Shoes” isn’t changing the game for pop music – instead, this song just making it a little more exciting to listen to this December. As a singer/songwriter, Gabel has been flirting with a basic pop blueprint for a while now, but here she takes the next step of imprinting her own unique harmonies onto a beat that is both familiar and clandestinely affectionate. It’s a fun track from top to bottom, and definitely one that doesn’t leave you feeling a sugar hangover when its melody comes to a conclusion.

The visuals for this single’s video are a continuation of the spunky, happy-go-lucky look that Gabel established in her last cut, “Stir Crazy,” but with just a bit more of an elaborate center. I’ve never been one for big theatrics in a pop video, but her inclusion of different prop elements doesn’t come off with as bearing an artificial hue at all. Contrarily, they’re an extension of her joyful persona and the color it casts over every melodic verse she sings to us, which is precisely what I would want to go for in this piece were I in charge of the project.

If you’ve been hearing some good things about Stacy Gabel lately, you’re not alone; she’s becoming a favorite of critics and a trending singer/songwriter in and outside of her scene, and once live music returns to our lives something tells me she’s going to be quite the popular figure on the tour circuit. She’s got an attitude that makes just about any moody personality want to crack a smile and embrace the easy-going vibe of her rhythmic songwriting, and that’s half of what it takes to become a superstar in this style of music.