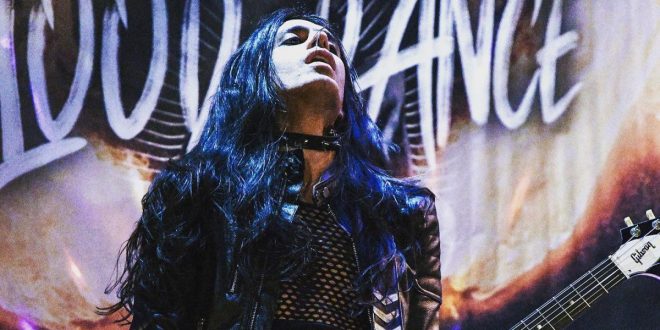 The thrust of “Beaming Right Up” is indeed alive and well in the groove that sits beneath the distorted melodic volley driving home “Communion” this December, but if you think Makes My Blood Dance simply repurposed the setup for their debut in this fourth official single, you’d better think again. Establishing themselves as a band with their own sound independent from any movement within rock or metal at the moment, Makes My Blood Dance insert themselves in a fight between heaven and hell here – and somehow emerge from the cloud of smoke sounding as omnipotent as they do sinfully addictive to rock fans.

These guitars aren’t the only source of intensity in “Communion,” but in fact a catalyst for the stabbing of the Faith No More-style bass part and robotic grind of the percussion in the backdrop. The lead vocal is the only element that hasn’t been gelled together with the rest of the instrumentation in a bid to create as much physicality up front as possible. The backend of the mix is a little light in the chorus and the solo, but were it not I don’t know that the sharper points in the melody here would be quite as enrapturing as they are now.

Makes My Blood Dance are making a style of rock music that is very specifically geared towards one audience above all others, but at the same time I think their versatility as songwriters and executional masterminds as players makes it difficult for even the most discriminating of listeners to resist their sound. I’ve got high hopes for what their first album is going to look and feel like when it finally comes down the pipes and introduces us to another angle of Makes My Blood Dance’s sound, but until its arrival “Communion” is a good track for rockers of all ages and backgrounds to start their winter with.