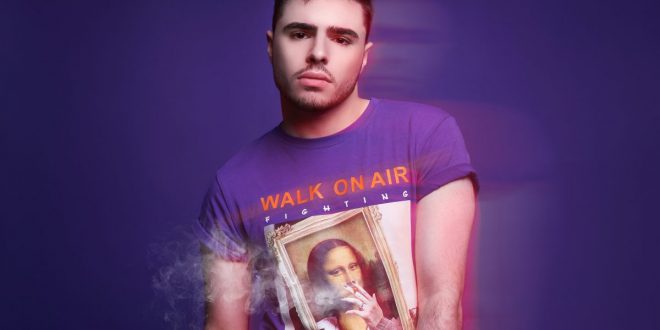 Boston, Massachusetts-based singer/songwriter Michael Kouroubacalis is in a musical league of his own – one that emphasizes creativity, innovation, and unapologetic pop magic. As half of the brother/sister duo Michael and Marissa, he kept a consistent run opening for big-name acts, and it would take nearly a decade before he established himself as a solo artist. By 2017, Kouroubacalis, now under the name MkX, emerged with the singles “The Look” and “Ghost,” each not only amassing hundreds of thousands of streams, but giving listeners a taste of his nostalgically melodic, yet modernly slick production approach.

Following MkX’s release of the music video for his latest single, “Fall,” I decided to interview him to get a better idea of his journey. We discussed how his formative period shaped his drive up to this point, the solidification of his solo artist stature, as well as what he aims to reintroduce – and simultaneously expand upon – in pop music today.

Growing up, you were surrounded by cassettes, CDs, and a Fisher-Price tape recorder. How did those things play a role in shaping your musicianship?

So, when I was little, I would put cassettes in my tape recorder and write songs, and I loved doing that ever since I was three. I also had a gigantic CD collection and was obsessed with music. None of my parents were musicians or music-oriented, so that kind of took them by surprise, but they were very supportive and just loved to see me have such a strong passion for something. I just kept surrounding myself with music and doing what I loved.

By the time you went to grade school, you really studied up on graphic design, and then moved onto audio recording software like Garageband, Logic, and Pro Tools. Did you take to them immediately, or was there a bit of a learning curve?

I’d say it was very gradual. When I was in third grade, my school got the Mac computers with Garageband, iMovie, and all that good stuff, so that was the time I started having a real passion for it. As time went on, I felt a bit limited by that software and its capabilities, but it was the stepping stone for moving onto other things like Logic and Final Cut. I just started expanding my knowledge, teaching myself stuff and watching YouTube tutorials. I did struggle a bit at first, but once I became a freshman in high school, that’s when I really got into Logic. I took an online course on it through Berklee College of Music, and that gave me a lot of opportunities in terms of creating and utilizing different features. It was an awesome learning curve that I got to experience.

You’ve also been playing tons of shows with your sister Marissa by this point, and eventually, you opened for major artists like Ariana Grande, Christina Perri, and Rixton, just to name a few! What was going through your mind as you moved up the ranks?

It was really crazy. Back then, when I was around 7 years old, we were performing on the street or on the back of trucks, and over time, more people wanted to book us for this show and that show. It progressed over those many years; we just kept doing it. It showed us that hard work pays off, and was a reminder for us to never give up on our dreams, because you never know what might happen. It was so cool to take a step back and be like, “Wow, I can’t believe we got to open for all these artists!”

As you mentioned, you eventually enrolled at Berklee. How was that transition, having those years of touring under your belt and then going to one of the top music-oriented schools?

I think it was really beneficial for me, especially from a social aspect. In elementary, middle, and high school, I felt like I was kind of the odd one out since not many people shared the same passion as I did for making music and just doing your own thing. So, being there was such a great experience and shaped me as a young adult. I did some summer programs at Berklee while I was in high school, and it was one of the best times of my life – being able to finally meet other kids who shared my passion. It was a great vibe and I’m so grateful that I got to experience that.

Essentially, it was like your calling. Once you go to Berklee, that’s it. It’s the cream of the crop.

Yeah! I finally felt like I belonged, and like I found my home, you know? It was so great to be surrounded by that many people who shared that passion with me.

Now, you have your new single out, “Fall,” and a highlight about it that I notice is its inspiration from late 90s and early 2000s pop. While you were writing the song, at what point did this inspiration kick in?

With that song, I managed to write it in one night. I cut a rough demo of it and had all these ideas about giving it a late 90s and early 2000s vibe. The pop music scene during that time was what I grew up on, and it had artists that I looked up to. I just wanted to pay homage to that era, and even though I wrote the song quite fast, I really wanted to take my sweet time with the production aspect, and make sure that I stuck to the full vision. I actually bought a synthesizer that was very popular in that era, the Roland JV-2080, got some extension cards for it, and found all of these crazy tones and sounds that were in my favorite albums growing up. I was like, “Oh my God, that’s that sound from ‘this’ song, and that’s the sound from ‘that’ song!” Exploring that synthesizer and what it was all about definitely brought that vision to life.

That’s so cool how you were able to not only able to write the song in a short amount of time, but you actually tracked down a synthesizer from that era.

Yeah! I did a ton of research on those sounds. I mean, I’m a huge Max Martin fan, and I love the songs he wrote for Britney Spears and NSYNC. I wanted to put that in the forefront of people’s minds, so they could instantly recognize those sounds, and being able to incorporate the synthesizer like that was a lot of fun.

Aside from your role as producer, you’ve also worked as a songwriter for other artists. Would you say your abilities have improved, especially these days?

Yeah, and I think of both songwriting and production as muscles; the more you stimulate them, the stronger they become. I will say that my production muscle seems to have gotten stronger than my songwriting muscle (laughs). With songwriting, I feel that when you put a unique perspective on what someone goes through in their everyday lives, you’ll get more familiar with making the songs sound fresh, so whoever hears them would be like, “Oh, I never thought about it that way.” In high school, with production, I remember being in the library with my headphones on, spending every second of free time I had making beats, and doing that kind of thing. It’s just so much fun; you’re doing what you love. Of course I’d want to make that muscle stronger because it’s playtime for me, you know?

Your artist name, MkX, represents the path that you’ve taken, which began when you were three years old. Do you feel that it was not only down to your own ambition and confidence, but the consistent support from your family and others around you?

Yeah, my family has been super supportive. I think the main thing that happened – that made me find my ‘X,’ as I’d like to call it – was going to Berklee and moving into the city. When I was in grade school, like I’d mentioned before, I was the odd one out, and because of that, I’d started to think, “Am I weird? Am I not normal,” because it kind of makes you question yourself. But once I got into Berklee, I felt like many people just got me and it was like having this uplifting support system. Of course, my family has been there for the whole journey, too. One of the things I aim to do with my music is allow listeners to find their ‘X’ – the factor that makes them unique – and put it in the forefront.

Up until this point, you’ve earned tremendous stature as a pop artist and songwriter. What do you think has been missing in pop music nowadays, that you’re not only striving to bring back, but also innovate?

I definitely want to bring back that super pop atmosphere from back then, which has taken a backseat for a while now – the big harmonies, the splashy instrumentation – that made it larger than life. Right now, I’m influenced by producers like Sophie and Cashmere Cat – really cool, cutting edge sound designers who have these really cool, unique, gritty, industrial synth tones.

You definitely encompass both worlds. I can hear those classic, snappy hooks, but with these updated, modern twists here and there, and considering how saturated pop music has become, I honestly haven’t heard anything implemented as well as how you do it.

It means a lot that you feel this way about my music, because that’s the magic I’m trying to bring back to pop, so it’s great you recognize that. Thank you!

Taking your career into account, what have you learned about yourself, as a musician and as a person?

I learned to be more in touch with the things that make me unique, and to use them as my super power. For me, it involves making music and videos, but also just being myself. I wish other people would try not to conform to what’s popular, and instead, for us to be comfortable being a bunch of freaks together, you know?

Thank you for believing in me and my music. It means the absolute world. I also believe in all of you, and that you can do anything you set your mind to! Just stay focused, don’t let anybody tear you down, and be you to the fullest.

I come from a family who is passionate about all things music. I learned to sing at an early age, and by 13, had my very own Fender Strat guitar. I tried my hardest at learning all that I could. Because I was born with cerebral palsy, I had to teach myself an adaptive playing style. I learned to write and record my own music, despite these difficulties. In college, I started making great use of my writing abilities by reviewing music, as well as copy editing. I guess it's best to stick with what you know, while welcoming a fair challenge at the same time.
Previous XVT BOMBI EP “Bizarre” Available on all Platforms
Next Single Review: Larry Jay “Drunk On Dreams”